No Dawn without Darkness: No Safety In Numbers: Book 3 (Hardcover) - signed by the author 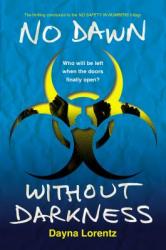 Perfect for fans of Life As We Knew It and Michael Grant's Gone--this conclusion to the No Safety in Numbers trilogy will make your heart race, your palms sweat, and will leave you wondering exactly what you'd be willing to sacrifice in order to survive.

First--a bomb released a deadly flu virus and the entire mall was quarantined.

Next--the medical teams evacuated and the windows were boarded up just before the virus mutated.

Now--the power is out and the mall is thrown into darkness. Shay, Marco, Lexi, Ryan, and Ginger aren't the same people they were two weeks ago. Just like the virus, they've had to change in order to survive. And not all for the better. When no one can see your face, you can be anyone you want to be, and, when the doors finally open, they may not like what they've become.

If you think it's silly to be afraid of the dark, you're wrong.
Very wrong.