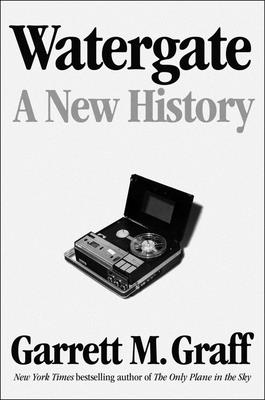 Copies of Watergate: A New History and the button packs will be available a few days after the publication date which is February 15, 2022.  If you ordered a book for store pick up, we will contact you as soon as it's ready.  If you ordered a book with shipping, please allow an additional 7-10 days for delivery via USPS Media Mail.

“A half-century after the Watergate break-in, this anniversary history becomes the standard-setting base line for all future ones.… Brisk, riveting, compulsively readable” — Kirkus Reviews (starred review)

“Watergate is one of the great tragic double-edged swords of modern American history: its crimes were swiftly exposed, the criminals punished, the rule of law restored—and it profoundly, permanently undermined American citizens’ trust in their government. Garrett M. Graff’s fresh chronicle of that inflection point is lucid, enlightening, and indispensable.” —KURT ANDERSEN, bestselling author of Evil Geniuses and writer-host of the Nixon at War podcast

In the early morning hours of June 17, 1972, a security guard named Frank Wills entered six words into the logbook of the Watergate office complex that changed the course of history: 1:47 AM Found tape on doors; call police.

The subsequent arrests of five men seeking to bug and burgle the Democratic National Committee offices—three of them Cuban exiles, two of them former intelligence operatives—unraveled a web of scandal that ultimately ended a presidency and forever altered views of moral authority and leadership. Watergate, as the event is called, became a shorthand for corruption, deceit, and unanswered questions. Now, award-winning journalist and bestselling author Garrett M. Graff explores the full scope of this unprecedented moment from start to finish, in the first comprehensive, single-volume account in decades.

Using newly public documents, transcripts, and revelations, Graff recounts every twist with remarkable detail and page-turning drama, bringing readers into the backrooms of Washington, chaotic daily newsrooms, crowded Senate hearings, and even the Oval Office itself during one of the darkest chapters in American history. The story begins in 1971, with the publication of thousands of military and government documents known as the Pentagon Papers, and builds with an unsteady line of dangerous political dominoes, from the creation of a series of covert operations code-named GEMSTONE to campaign-trail dirty tricks, possible hostage situations, and questionable fundraising efforts—much of it all caught on the White House’s own taping system.

Then the thwarted June burglary attracts the attention of intrepid journalists, congressional investigators, and embattled intelligence officers—one of whom will spend decades concealing his identity behind the alias “Deep Throat”—and dominoes fall one by one, as a conspiracy deeper and more corrupt than anyone thought possible emerges.

Grippingly told and meticulously researched, Watergate is the defining account of the moment that has haunted our nation’s past—and still holds the power to shape its present and future.

“A brisk, riveting, compulsively readable, comprehensive, up-to-date narrative of the entire tangled affair, and it’s hard to imagine it better told. . . . Now the best and fullest account of the Watergate crisis, one unlikely to be surpassed anytime soon.”
—Kirkus Reviews (starred review)

“Garrett M. Graff aptly calls Watergate a ‘Gordian knot of scandal.’ This comprehensive, searching, yet elegant book untangles it more completely than any attempt so far. I learned a lot!” —RICK PERLSTEIN, bestselling author of Nixonland and Reaganland