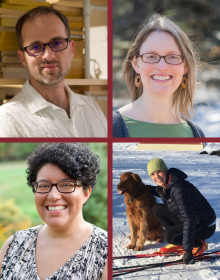 William Alexander won the National Book Award for his debut novel, Goblin Secrets, and won the Earphones Award for his narration of the audiobook. His other novels include A Festival of Ghosts, A Properly Unhaunted Place, Ghoulish Song, Nomad, and Ambassador. William studied theater and folklore at Oberlin College, English at the University of Vermont, and creative writing at the Clarion workshop. He teaches in the Vermont College of Fine Arts MFA program in Writing for Children and Young Adults. Like the protagonist of Nomad and Ambassador, William is the son of a Latino immigrant to the US. Visit him online at WillAlex.net and GoblinSecrets.com, and on Twitter via @WillieAlex.

Ann Braden writes books about kids struggling to find their voice amidst the realities of life. She founded GunSenseVT, a grassroots group focused on championing the common ground on the issue of guns in Vermont, which recently helped pass landmark gun violence prevention legislation. She also founded the Local Love Brigade, which now has chapters all over the country sending love postcards to those who are facing hate. Ann is the co-host of the children's book podcast, "Lifelines: Books that Bridge the Divide," along with Pakistani American author Saadia Faruqi, and is a former middle school teacher. She lives in southern Vermont with her husband, two children, and two insatiable cats named Boomer and Justice. Visit her online at www.annbradenbooks.com.

Kekla Magoon grew up in Indiana but wanted to see the rest of the world. Now she travels all over the country meeting young readers and sharing her books, which include The Rock and the River, Camo Girl, and Shadows of Sherwood (The Robyn Hoodlum Adventures series). She has won numerous awards for her work, including two Coretta Scott King Honors, an NAACP Image Award, the Walter Award Honor, and inclusion on the National Book Award Long List. She holds a BA from Northwestern University and an MFA in Writing from Vermont College of Fine Arts, where she now serves on faculty. Visit her online at keklamagoon.com and you’ll see: she is anything but ordinary!

Lindsey Stoddard was born and raised in Vermont, where she began her lifelong love of reading. She taught middle school English in New York City for ten years, then received her MFA in Writing for Children and Young Adults at Vermont College of Fine Arts. Just Like Jackie is her debut novel, and her second novel, Right as Rain, was released in February.

A Festival of Ghosts (Hardcover)

National Book Award winner William Alexander conjures up a spooky adventure full of excitement in this entertaining sequel to A Properly Unhaunted Place.

Rosa Ramona Diaz, the ghost appeasing assistant librarian, has unleashed all the ghosts who were previously shut out of the small town of Ingot. Now ghosts are everywhere, and the town’s living residents are either learning to cope or trying to do the one thing no one can successfully do—banish the ghosts.

At school, something supernatural is stealing kids’ voices and leaving them speechless. And it’s Rosa’s job to solve the mystery and set things right. Meanwhile her best friend Jasper is dealing with what remains of the Renaissance Festival, where ghosts from Ingot’s past are now battling it out with the ghosts of the Renaissance reenactors. And Rosa is experiencing a haunting of her own—could her father’s ghost have followed her here?

Somehow Rosa and Jasper are going to have to find a way to bring Ingot back to normal—in a world where the living are now residing side-by-side with the dearly departed.

The Benefits of Being an Octopus (Hardcover)

This relatable look at life in poverty for a kid today—and how hard it is to break out of the cycle—is perfect for fans of Joan Bauer and Cynthia Voigt.

An NPR Best Book of 2018!
Some people can do their homework. Some people get to have crushes on boys. Some people have other things they've got to do.

Seventh-grader Zoey has her hands full as she takes care of her much younger siblings after school every day while her mom works her shift at the pizza parlor. Not that her mom seems to appreciate it. At least there's Lenny, her mom's boyfriend—they all get to live in his nice, clean trailer.

At school, Zoey tries to stay under the radar. Her only friend Fuchsia has her own issues, and since they're in an entirely different world than the rich kids, it's best if no one notices them.

Zoey thinks how much easier everything would be if she were an octopus: eight arms to do eight things at once. Incredible camouflage ability and steady, unblinking vision. Powerful protective defenses.

Unfortunately, she's not totally invisible, and one of her teachers forces her to join the debate club. Even though Zoey resists participating, debate ultimately leads her to see things in a new way: her mom’s relationship with Lenny, Fuchsia's situation, and her own place in this town of people who think they're better than her. Can Zoey find the courage to speak up, even if it means risking the most stable home she's ever had?

This moving debut novel explores the cultural divides around class and the gun debate through the eyes of one girl, living on the edges of society, trying to find her way forward.

The Season of Styx Malone (Hardcover)

Meet Caleb and Bobby Gene, two brothers embarking on a madcap, heartwarming, one-thing-leads-to-another adventure, for fans of As Brave As You by Jason Reynolds, Merci Suarez Changes Gears by Meg Medina, Front Desk by Kelly Yang, and One Crazy Summer by Rita Williams-Garcia. Friendships are forged, loyalties are tested…and miracles just might happen.

Caleb Franklin and his big brother Bobby Gene are excited to have adventures in the woods behind their house. But Caleb dreams of venturing beyond their ordinary small town.

Then Caleb and Bobby Gene meet new neighbor Styx Malone. Styx is sixteen and oozes cool. Styx promises the brothers that together, the three of them can pull off the Great Escalator Trade—exchanging one small thing for something better until they achieve their wildest dream. But as the trades get bigger, the brothers soon find themselves in over their heads. Styx has secrets—secrets so big they could ruin everything.

An extraordinary middle grade debut about an unforgettable heroine and her unconventional family. In the tradition of Lynda Mullaly Hunt, John David Anderson, Holly Goldberg Sloan, and Ann M. Martin, readers across generations will cheer and cry for Robbie Hart as she learns that family is family, no matter what it looks like.

For as long as Robinson Hart can remember, it’s just been her and Grandpa. Robbie knows they look like an odd pair, because her blond hair and pale skin don’t match his dark complexion—but those differences don’t mean anything to her. And though she wishes Grandpa would tell her more about the rest of her family, she’s learned over the years that he doesn’t like to talk about the past. But Grandpa’s memory is starting to get bad, and Robbie’s worried that soon he won’t remember their family—including her—at all. She’s sure that he would get better if she could stay out of trouble, but it’s hard to keep her fists to herself when bullies like Alex Carter make fun of her for not having a mom or for looking so different from Grandpa. It’s up to Robbie to learn how to deal with her anger and to keep her family together—no matter what.

Ann M. Martin, New York Times bestselling author of Rain Reign, called Just Like Jackie “a lovely story of acceptance—about what makes a family and how we make our own families, and about embracing our differences,” and Cammie McGovern, author of Just My Luck, deemed it “as close to perfect as a book for middle grade children can get!” Just Like Jackie deals with the multiracial family experience, bullying, and a beloved grandparent’s decline, with a striking and uplifting message of acceptance, forgiveness, and unconditional love.