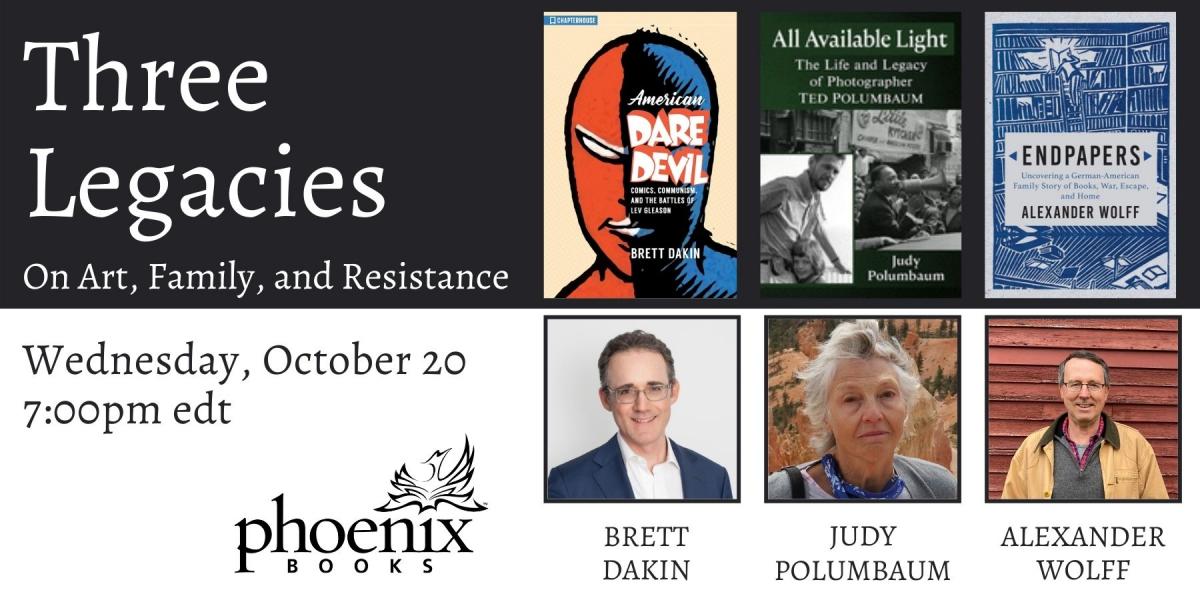 Please join us for an evening with authors Alexander Wolff, Brett Dakin, and Judy Polumbaum for a discussion of their new non-fiction titles which revolve around family histories and in which resistance to various forms of political depravity play a key role.

Alexander Wolff’s Endpapers: A Family Story of Books, War, Escape, and Home  is a sweeping portrait of the turmoil of the twentieth century and the legacy of immigration, as seen through the German-American family of the celebrated book publisher Kurt Wolff.

A literary gem researched over a year the author spent living in Berlin, Endpapers excavates the extraordinary histories of the author’s grandfather and father: the renowned publisher Kurt Wolff, dubbed “perhaps the twentieth century’s most discriminating publisher” by the New York Times Book Review, and his son Niko, who fought in the Wehrmacht during World War II before coming to America.  With surprising revelations from never-before-published family letters, diaries, and photographs, Endpapers is a moving and intimate family story, weaving a literary tapestry of the perils, triumphs, and secrets of history and exile.

Alexander Wolff spent thirty-six years on staff at Sports Illustrated. He is author or editor of nine books, including the New York Times bestseller Raw Recruits and Big Game, Small World, which was named a New York Times Notable Book. A former Ferris Professor of Journalism at Princeton, he lives with his family in Vermont.

Meet Lev Gleason, a real life superhero in Brett Dakin's biography of his great-uncle, American Daredevil:  Comics, Communism, and the Battles of Lev Gleason.  Dakin opens up the family archives-and the files of the FBI-to take you on a journey through the publisher's life and career. In American Daredevil, you'll learn the truth about Gleason's rapid rise to the top of comics, unapologetic Progressive activism, and sudden fall from grace.

Lev Gleason was a titan among Golden Age comics publishers who fought back against the censorship campaigns and paranoia of the Red Scare. After dropping out of Harvard to fight in France, Gleason moved to New York City and eventually made it big with groundbreaking titles like Daredevil and Crime Does Not Pay.

Brett Dakin is the author of American Daredevil: Comics, Communism, and the Battles of Lev Gleason  and Another Quiet American: Stories of Life in Laos. Brett's writing has appeared in Foreign Affairs, the International Herald Tribune, The Washington Post, and The Guardian. A graduate of Princeton University and Harvard Law School, Brett grew up in London and now lives in New York City with his husband--and their dog, Carl.

As a young journalist during the Red Scare of the early 1950s, Ted Polumbaum defied Congressional inquisitors and suffered the usual consequences--he was fired, blacklisted, and trailed by the FBI. Yet he survived with his integrity intact to build a new career as an intrepid photojournalist, covering some of the most critical struggles of the latter half of the 20th century. In All Available Light: The Life and Legacy of Photographer Ted Polumbaum, his daughter introduces this quirky, accomplished, politically engaged family man of the "Greatest Generation," who was both of and ahead of his times. Polumbaum's fortitude, humor and optimism emerge, animated by the conscience of principled dissidence and social activism. His photography, with its unpretentious portrayals of the famous, the infamous, and the unsung heroes of humanity around the world, reflects his courage in the face of mass hysteria and his lifelong commitment to social justice.

Judy Polumbaum, University of Iowa professor emerita of journalism and mass communication, is a journalist, scholar and educator with a long and varied publication record. She lives on the outskirts of Las Vegas.

Registration is free, but book purchases are welcomed and appreciated--thank you for supporting our author! You must register on this page to attend the event. The event will stream on Zoom. You will receive an email with the Zoom link after registering. If you don't receive a confirmation email after registering today, contact us right away so we can check for problems.