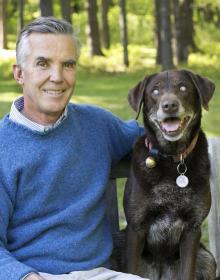 Join us for an evening of inspiration with Bessie, a beautiful chocolate lab, and her owner (and author), Thomas Farmen who discovers just how much dogs can teach us about ourselves in his book, Bessie's Story: Watching the Lights Go Out.

Praise for BESSIE’S STORY -
Author Steven Bauer (The Strange and Wonderful Story of Robert McDoodle: The Boy Who Wanted To Be a Dog) writes of Bessie's Story:
This is the first-person non-fiction account of several years in the lives of a man approaching retirement and his chocolate Lab as she gradually loses her sight. It painstakingly traces the subtle but inexorable changes in Bessie, an exuberant passionate retriever and lover of humanity, as she struggles to make sense of a world of increasing darkness and learns to compensate for her disability. As Bessie adapts, so does he; his behaviors alter in response to her behaviors. He becomes more watchful, mindful, compassionate, and also ingenious as he dreams up ways to make her life easier and better. His love for her grows and grows.

While Bessie’s condition was supposed to progress from diagnosis to total blindness in a year, she manages, miraculously, to hold on to some of her sight for two and a half years. During this long period, she refuses to allow what is happening to her to slow her down, to change her routines, or to modify the things she loves to do.

Though the narrator’s retirement after over forty-two years of teaching and school administration is referred to only a few times, it seems to me it’s really the subtext of the book; he sees (or fears) parallels between what is happening to Bessie and what will happen to him, psychologically or physically. Perhaps the borders of his life will close in; perhaps he will no longer be able to do the things he loves; perhaps his routine will change irrevocably; perhaps with advancing age he will become more dependent, less capable.

Happily that doesn’t happen for him any more than it does for Bessie, and the lessons that he takes from the resolution, courage, and unconscious dignity of his dog he shares with the reader.

ABOUT THE AUTHOR: Thomas W. Farmen is the Headmaster Emeritus of Rumsey Hall School in Washington, Connecticut. He and his wife Ashley worked in partnership at the school for over four decades and now live in rural New Hampshire. Tom serves on the board for several non-profit organizations, including Special Olympics of New Hampshire, and is an ambassador at Mount Sunapee ski area.