Roads Taken: An Evening of Poetry 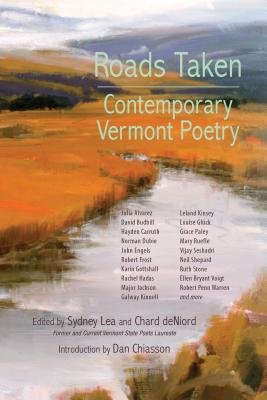 ABOUT THE BOOK: With its mystical landscape and fiercely self-reliant citizenry, Vermont has inspired poets from its earliest days. This anthology of contemporary Vermont poets represents a wide range of accomplished voices―both young and old, both renowned and relatively unestablished. Their poems offer news, in Ezra Pound’s words, that stays news, and they do so in a wide variety of forms and subjects. While there is no such thing as a particular brand of Vermont poetry, the poems in this volume claim Vermont as their place of origin, bearing witness to the remarkably rich and ongoing legacy of the state’s poetic tradition.  Roads Taken is edited by Sydney Lea, Chard deNiord, and Dede Cummings.

“Vermont tempts poets to epiphany by staying silent, or cold, or flinty, or dark, ironizes their praise. Many people move to Vermont because of the idea of it, an idea that has proven remarkably durable over time: as these poems suggest, so powerfully do the daily necessities of living there, of surviving there, assert themselves. This is where Frost comes in: Frost’s poems are the great rural instruction manual for our neck of the woods. His influence is everywhere in the poems collected here, which so often take ‘nature’ not as an idyllic refuge but as a site of careful, strenuous, and repeated steps or actions. The Vermonters in this book come from and live all over. Roads Taken is a ‘constellation/of patches and pitches,’ proof to me that Vermont will always require the imagination of its citizens to exist.”
—Dan Chiasson

David Cavanagh’s four books of poems are Straddle, The Middleman, and Falling Body, all from Salmon Poetry of Ireland; and Cycling in Plato’s Cave, from Fomite Press. David’s poems have also appeared in leading journals and anthologies in the U.S., Ireland, the U.K., and his native Canada. He lives in Burlington.

Jean Connor served as Director of Library Development at the New York State Library, but in her retirement is enjoying a second pursuit: the writing of poetry. A graduate of Middlebury College, she lives in Shelburne, Vermont. She is the author of two books: A Cartography of Peace and The Hinge of Joy (Passager Books).

Chard deNiord is the Poet Laureate of Vermont and author of five books of poetry, including Interstate, (The University of Pittsburgh Press, 2015), The Double Truth (University of Pittsburgh Press, 2011), which the Boston Globe named one of the top ten books of poetry in 2011, and Night Mowing (University of Pittsburgh Press, 2005). He teaches English and Creative Writing at Providence College, where he is a Professor of English. His book of essays and interviews with seven senior American poets (Galway Kinnell, Donald Hall. Maxine Kumin, Jack Gilbert, Ruth Stone, Lucille Clifton, Robert Bly) titled Sad Friends, Drowned Lovers, Stapled Songs, Conversations and Reflections on 20th Century American Poets was published by Marick Press in 2012. He is the co-founder and former program director of the New England College MFA Program in Poetry and a trustee of the Ruth Stone Trust. He lives in Westminster West, Vermont with his wife Liz.

Karin Gottshall is the author of two full-length collections of poems: Crocus (Fordham University Press, 2007), and The River Won’t Hold You (Ohio State University Press, 2014). She has also published several limited-edition chapbooks with small independent presses. Gottshall is the recipient of the Poets Out Loud Prize, the Journal/Wheeler Prize, and a fellowship from the Bread Loaf Writers’ Conference. She lives in Middlebury, Vermont, where she teaches at Middlebury College and directs the New England Young Writers’ Conference.

David Huddle teaches at the Bread Loaf School of English and in the Rainier Writing Workshop. His fiction, poetry, and essays have appeared in The American Scholar, The New Yorker, and The Georgia Review. His most recent poetry collection is Dream Sender (2015); and his new novel is My Immaculate Assassin (2016).

Kerrin McCadden is the author of Landscape with Plywood Silhouettes, winner of the 2015 Vermont Book Award and the 2013 New Issues Poetry Prize. She is the recipient of a National Endowment for the Arts Literature Fellowship and a graduate of The MFA Program for Writers at Warren Wilson College. She lives and teaches in Montpelier, Vermont.

Elizabeth Powell is the author of The Republic of Self, a New Issues First Book Prize winner, selected by C.K. Williams. Her second book of poems, Willy Loman’s Reckless Daughter: Living Truthfully Under Imaginary Circumstances, won the 2016 Anhinga Robert Dana Prize, selected by Maureen Seaton. She is editor of Green Mountains Review, and Associate Professor of Creative Writing at Johnson State College, and also serves on the faculties of the low-residency MFA in Creative Writing at the University of Nebraska-Omaha and Vermont College of Fine Arts Editing and Publishing.