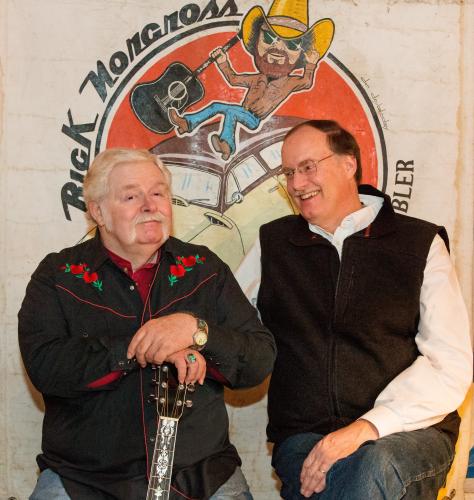 You're invited to the kick-off event for Riding My Guitar: The Rick Norcross Story! Join Stephen and Rick for a most entertaining evening during which Stephen will talk about the book, and Rick will sing some of his famous (infamous?!) original folk songs. Don't miss this event celebrating Rick's 50th anniversary as a professional musician.

After nearly three years of global research, Riding My Guitar will be off the presses in time for to coincide with Rick’s 50th Anniversary Concert Tour. "Writing this book has been an extraordinary journey," says Stephen, "I thank Rick for the hundreds of hours he’s ‘suffered’ through recalling his intriguing life and, believe it or not, we’re still good friends! Many fellow musicians, friends and fans from all over the world have generously shared their stories about Rick. I think it is all adding up to a fascinating tale."

“Being a flatlander often means missing out on some of the real Vermont stories. In his new book, Riding My Guitar - The Rick Norcross Story, author Stephen Russell Payne tells an engaging tale of an authentic Vermont talent who might otherwise have remained below the national radar. Rick Norcross’s gifts as a songwriter, performer and photographer are eclipsed only by his generosity and warmth.”
-- George Thomas, legendary VPR radio host

“Riding My Guitar is the entertaining story of a true Vermont original. Rick Norcross’s amazing journey has taken him throughout the US and to Europe, but at heart he remains a friendly, modest and very talented Vermonter. In telling this story of the irrepressible Norcross, Stephen Payne also gives us a vivid picture of rural Vermont in the 1950’s and ‘60’s. It’s a fun read!”
-- Tom Slayton, Editor Emeritus, Vermont Life Magazine

“Rick Norcross is a self made man hewn out of all that makes Vermont so unique. Somehow over the decades he has carved out a music career which stays close to its roots in the music he composes, sings and plays. So often his work provides a sense of where he’s from and what he has picked up traveling his own path, always bringing it back to the home place. You hear it whether on a recording, or a concert or just a kitchen tunk over at the neighbors. Good on yah’ Rick, Good on yah.”
-- Ken Squier, owner, Radio Vermont Group

“What I respect most about Rick is his strong sense of community and music’s role in bringing people together. He cares deeply about his fellow musicians and about each and every person sitting in the audience. I’ve taken many a ride in Rick’s bus to gigs, and he’s full of stories, which fi nd their way into his songs. Anyone who listens to our new CD will immediately appreciate how Rick can tell a funny story about a place like Hardwick, while at the same time expressing his true love for the town and its people.”
-- Charlie MacFadyen, Rambler Arranger & Piano Player

Rick Norcross is the longtime leader of Vermont's premier western swing band, Rick and the Ramblers.

Stephen Russell Payne is a fourth-generation Vermonter from the Northeast Kingdom town of St. Johnsbury. A lifelong writer, he has published fiction, non-fiction and poetry in a number of publications including Vermont Life magazine, the Tufts Review, The Vermont Literary Review, Livin’ the Vermont Way magazine and Route 7- Vermont Literary Journal. He's also the author of the novel Cliff Walking.