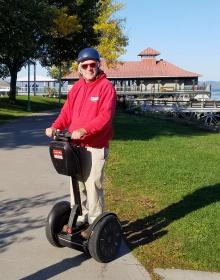 With Burlington Mayor Miro Weinberger kicking off the discussion, Phoenix Books Burlington and Onion River Press is pleased to celebrate the release of Burlington local Rick Sharp's The Burlington Bike Path and Waterfront Park: An Environmental Handbook for the Post Auto Era.  Mayor Weinberger will start at 7pm sharp with a few words about Rick's work on the waterfront.

ABOUT THE BOOK: Rick Sharp’s personal account of the creation of the Burlington Bicycle Path and Waterfront Park is also the story of how the bike path was then extended across the Winooski River and out to the Causeway to create the Island Line Trail in the late 1990s and early 2000s. Rick was instrumental in the creation of the Burlington Bike Path and Waterfront Park. In response to a proposal to build two 18-story luxury condominium towers on the waterfront downtown in 1980, Rick joined future Governor Howard Dean and UVM Environmental Studies professor, Tom Hudspeth, to form the Citizens Waterfront Group to advocate for the creation of a bike path on the waterfront instead.

This group popularized the concept of the bike path by capturing 75% support from city voters on an advisory ballot item in 1981. In 1984 the Group got a $750,000 bond approved by two-thirds of City voters to fund construction. The path was completed from Oakledge Park in the south to the mouth of the Winooski River in the north in 1990. It is now the #1 rated Attraction for Burlington on Trip Advisor.

ABOUT THE AUTHOR: A Burlington local, Rick and his wife Ruth Masters own and operate Burlington Segways, offering tours of the beloved bike path and waterfront park he worked tirelessly to help create.