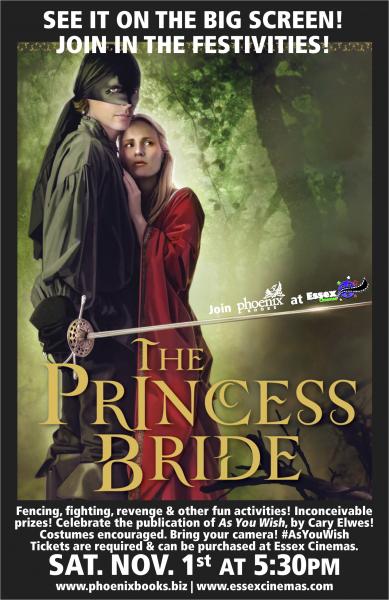 Fencing, fighting, torture, revenge, and other fun activities - as well as inconceivable prizes - are coming to Essex this November, along with a big-screen showing of The Princess Bride.  Phoenix Books and Essex Cinemas have partnered to throw a Princess Bride party - and a big screen showing - on Saturday, November 1st.  The festivities will start at 5:30pm at the cinema, and at 6:30pm seating will begin for a screening of the film in the T-Rex Theater®.  Costumes are encouraged. Tickets are required, and may be purchased at Essex Cinemas or online at www.essexcinemas.com.

"There will be joy," says Kristen, Phoenix's events manager.  "Anyone who knows never to go in against a Sicilian when death is on the line will want to be there. It'll be a blast for anyone new to The Princess Bride, too. The evening will feature games, prizes, costumes, photo ops, and general merriment.  For some of our prizes, we reached out to Houghton Mifflin, who publishes The Princess Bride, and they were as good as Miracle Max!  We're actually going to have a copy of The Princess Bride signed by William Goldman as part of our Grand Prize at this event. This is a special book, and it's cool to think it might be passed down as an heirloom, just like the copy of The Princess Bride that the grandfather reads in the film."  Eaton says that fans should be on the lookout for other chances to win Princess Bride-related prizes, and the chance to purchase their own signed copy of the book.

The event was inspired by the publication of the new memoir by Cary Elwes, As You Wish: Inconceivable Tales from the Making of The Princess Bride. Cary Elwes - who played Westley in the film - was inspired to share his memories and give fans an unprecedented look into the creation of the film while participating in the twenty-fifth anniversary cast reunion. In As You Wish he has created an enchanting experience; in addition to never-before seen photos and interviews with his fellow cast mates, there are plenty of set secrets and backstage stories.  With a foreword by Rob Reiner and a limited edition original poster by acclaimed artist Shepard Fairey, As You Wish is a must-have for fans of this beloved film.

The Princess Bride itself has been a family favorite for close to three decades, and has been ranked by the American Film Institute as one of the top 100 Greatest Love Stories and by the Writers Guild of America as one of the top 100 screenplays of all time.  The screenplay, written by William Goldman, is an adaptation of Goldman's book of the same title.

Both As You Wish and print editions of The Princess Bride will be available for sale at the event, as well as Andre the Giant: Life and Legend, Box Brown's graphic biography of the man who played Fezzik in The Princess Bride.

ADMISSION:  Tickets are required, and may be purchased at Essex Cinemas or online at www.essexcinemas.com.

As You Wish: Inconceivable Tales from the Making of The Princess Bride (Hardcover)