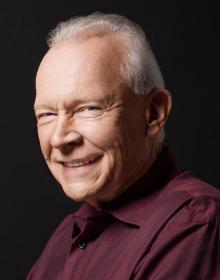 The publication of The Last Druid has been rescheduled for late October by the publisher.  Stay tuned for a new event date!

Join Terry Brooks for a talk his latest (and the final) book in The Fall of Shannara series:  The Last Druid!

ABOUT THE BOOK:  Hope blooms anew for the Four Lands in this riveting conclusion, not only to the Fall of Shannara series but to the entire Shannara saga—a truly landmark event over forty years in the making!

Since he first began the Shannara saga in 1977, Terry Brooks has had a clear idea of how the series should end, and now that moment is at hand.

As the Four Lands reels under the Skaar invasion—spearheaded by a warlike people determined to make this land their own—our heroes must decide what they will risk to save the integrity of their home. Even as one group remains to defend the Four Lands, another is undertaking a perilous journey across the sea to the Skaar homeland, carrying with them a new piece of technology that could change the face of the world forever. And yet a third is trapped in a deadly realm from which there may be no escape.

Filled with twists and turns and epic feats of derring-do—not untouched by tragedy—this is vintage Terry Brooks, and a fitting end to a saga that has gathered generations of readers into its fold.

ABOUT THE AUTHOR: Terry Brooks has thrilled readers for decades with his powers of imagination and storytelling. He is the author of more than thirty books, most of which have been New York Times bestsellers. He lives with his wife, Judine, in the Pacific Northwest.

“If Tolkien is the grandfather of modern fantasy, Terry Brooks is its favorite uncle.”—Peter V. Brett, New York Times bestselling author of The Core

“I can’t even begin to count how many of Terry Brooks’s books I've read (and re-read) over the years. From Shannara to Landover, his work was a huge part of my childhood.”—Patrick Rothfuss, New York Times bestselling author of The Name of the Wind

“Terry Brooks is a master of the craft and a trailblazer who established fantasy as a viable genre. He is required reading.”—Brent Weeks, New York Times bestselling author of The Night Angel Trilogy

“The Shannara books were among the first to really capture my imagination. My daydreams and therefore my stories will always owe a debt to Terry Brooks.”—Brandon Mull, #1 New York Times bestselling author of the Beyonders series and the Fablehaven series

The Last Druid (The Fall of Shannara #4) (Hardcover)