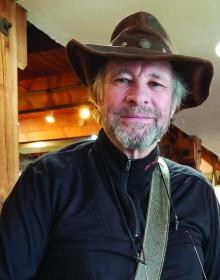 Out of an abundance of caution, we have decided to postpone all of our events/story times for the month of April. Please check back soon for the new date for this event.

Join Phoenix Books Burlington and Onion River Press for a celebration of the release of The Granville Hermit by Robert "Butch" Foster.

What drives a man to withdraw?

What drove a quiet man to choose a life of solitude--away from people he knew, and grew up with?

By early adulthood Carl Morse had experienced betrayals, leaving only a select few he could trust. Was it the heartless acts of others? Was it lost love? Was it the atrocities of WWI? What was it that altered Carl Morse's attitude toward society and public interaction? He was known as a seer, a horse whisperer, one who could read people, who could intuit what was going to happen...

And yet...he retreated into the forest he loved, to the creatures he cherished, the place he felt safe, to reappear only twice a year.

Based on the real life of Carl L. Morse of Granville, Vermont, Morse's life became folklore. He lived, he loved, he retreated, he vanished.

He is not forgotten.

ABOUT THE AUTHOR: Robert S. "Butch" Foster met Carl Morse as a child. He was fascinated by their encounter, feeling that he, too, shared the gift. His passions over the years have included beekeeping, aviation, woodsmanship, guitar, song writing, fly fishing and upholding "old school" New England values and traditions. Today Butch enjoys making music, writing, restoring old things, ancient native Indian cultures along with the quiet natural beauty and energy of Vermont's Green Mountains.