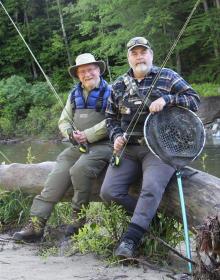 Join Peter Shea and Bob Shannon for a talk on their book Vermont Trout Streams.

ABOUT THE BOOK:  The Shannon-Shea writing partnership has surely given the luck of the Irish to those who wave a fishing rod in the Green Mountain State. Vermont Trout Streams is the first ground-up, comprehensive treatment of Vermont’s trout streams in more than thirty years. Within it, each author brings their own unique decades of experience to bear, in creating an extraordinary guidebook. The result is a complete guide to the geography and strategies of fly fishing the streams and rivers of Vermont – from Abbot to Zeebeedee Brooks. It is a reference work that anyone who chases trout in Vermont will want in their library. It offers the fly-fishing angler, in particular, an unprecedented wealth of information on the when, how, and where to fish.

ABOUT THE AUTHORS:
Bob Shannon is the owner of the Fly Rod Shop in Stowe, Vermont, and a professional fly-fishing guide for over 30 years. His travels have taken him to New York, Canada, Montana, and the Caribbean. As an adjunct professor at Northern Vermont University, he has taught students about fly fishing for over 25 years.  He was a member of the Vermont Fish & Wildlife Board for 11 years, as well as a former board member of Lake Champlain International.  Bob was a contributor to Fifty Best Places: Fly Fishing the Northeast (Mallard, editor). Featured in many television fishing programs and radio shows, he has also been a celebrity speaker throughout the United States.

Angling geographer, cartographer, and Vermont researcher Peter Shea, has fished in Vermont since childhood, and has previously authored eight books on Vermont trout fishing. These include the very first edition of Vermont Trout Streams, in 1985, as well as his writing and illustrating of these recently published titles: The New Atlas of Vermont Trout Ponds (2018), Collateral Trout (2017), Vermont’s Trophy Trout Waters (2016), Long Trail Trout (2015), and, Vermont Trout Ponds (2014). He was co-author and editor of Access America: An Atlas and Guide to the National Parks for Visitors with Disabilities, which was selected as a “Best Reference” by the American Library Association.

ADMISSION: Proceeds from ticket sales will go to the Vermont Foodbank. Your $3 ticket comes with a coupon for $5 off a copy of the featured book. Coupons expire at closing the evening of the event.