Join us for New Voices 2017!  This event will take place offsite at the First Universalist Church, Stone Village, Chester.  Tickets ($10) will be available at the bookstore prior to the event. 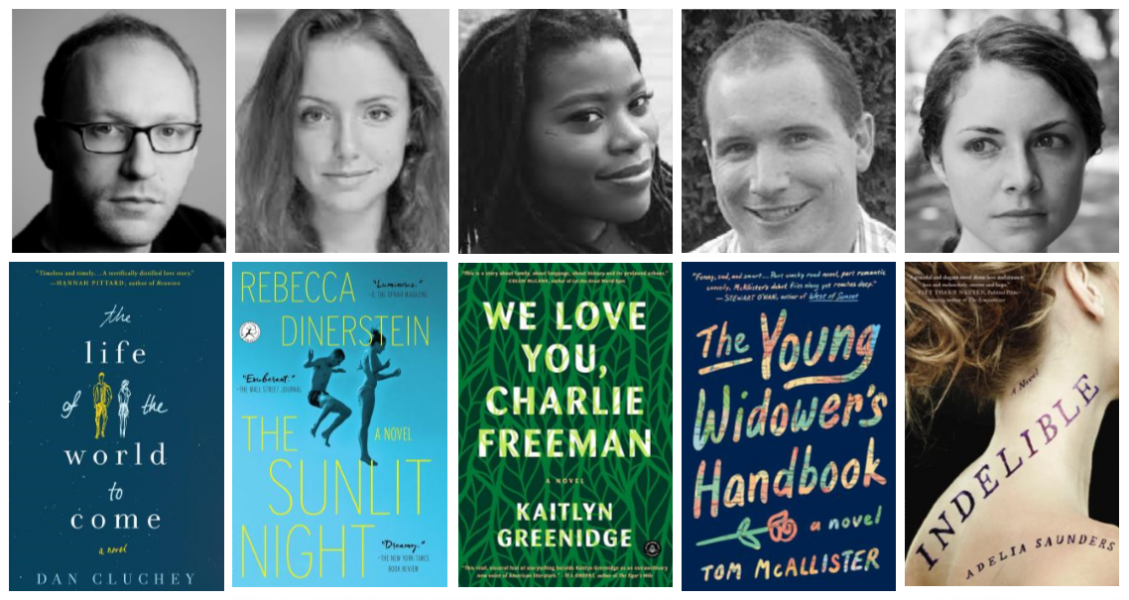 Dan Cluchey is a native of Portland, Maine, and a former Obama Administration speechwriter and advisor. During his time in Washington, he wrote hundreds of speeches and op-eds on behalf of senior leaders throughout the Administration, on topics ranging from healthcare reform to international trade. A graduate of Amherst College and Harvard Law School, he lives in New Haven, CT. The Life of the World to Come is his first novel.

Rebecca Dinerstein is the author of Lofoten, a bilingual English-Norwegian collection of poems. She received her B.A. from Yale and her M.F.A. in Fiction from New York University, where she was a Rona Jaffe Graduate Fellow. She lives in Brooklyn.

Kaitlyn Greenidge received her MFA from Hunter College, where she studied with Nathan Englander and Peter Carey, and was Colson Whitehead's writing assistant as part of the Hertog Research Fellowship. Greenidge was the recipient of the Bernard Cohen Short Story Prize. She was a Bread Loaf scholar, a Lower Manhattan Cultural Council Workspace artist-in-residence, and a Johnson State College visiting emerging writer. Her work has appeared in the Believer, the Feminist Wire, At Length, Fortnight Journal, Green Mountains Review, Afrobeat Journal, the Tottenville Review, and American Short Fiction. Originally from Boston, she now lives in Brooklyn.

A Philadelphia native, Tom McAllister lives in New Jersey, teaches at Temple, and is a graduate of the Iowa Writers' Workshop, an editor at Barrelhouse, and the author of a memoir, Bury Me in My Jersey: A Memoir of My Father, Football, and Philly. The Young Widower's Handbook is his first novel.

Adelia Saunders has a master's degree from Georgetown University’s School of Foreign Service and a bachelor's degree from NYU. She has taught English in Paris, written for an independent newswire at the United Nations, and assisted an agricultural economist in Uganda. She grew up in Durango, Colorado, and currently lives with her husband and two small children in New York City, where she works for an international think tank. Indelible is her first novel.

ABOUT NEW VOICES:  New Voices is a program which has attracted national attention, and a number of Misty Valley New Voices – including Dennis Lehane, Colum McCann, Arthur Golden, Gregory Maguire, Jennifer Egan, Alex Berenson, Heidi Durrow and Dr. Eben Alexander – have gone on to considerable fame. Over the years, New Voices has attracted thousands of loyal readers to hear well over 100 new authors read and discuss their work. The public is invited to cross country ski at Grafton Ponds ($$) with the authors, attend a wine and cheese reception (free) and dinner at The Fullerton Inn ($$) with the authors afterwards.

Events scheduled as part of New Voices on Saturday, January 28th - all open to the public - include:

The Life of the World to Come: A Novel (Hardcover)

Leo Brice is dead, in a sense (not the traditional one). When the neurotic law student meets his cosmic match in Fiona Haeberle, an impulsive spirit and burgeoning soap star, all seems well—the two fall fast in love, and spend three years navigating their twenties in wide-eyed wonder. But once the fantastical woman who had defined his future bolts to pursue a fantasy life of her own, Leo is forced to come to terms with a reality that more closely resembles an epilogue than the story he’d hoped it might be. Now a junior death row advocate, Leo immerses himself in the esoteric world of his condemned client, a born-again Georgia inmate named Michael Tiegs. As both men become consumed by the question of an afterlife—and as Leo becomes increasingly confused by his own future and past—Tiegs’ fate hangs in the balance. Leaning on his friends and grappling with his memories, Leo must try to save a client who may not want to be saved after all, even as he struggles to confront the prospect of his own mortality.

At once obsessively readable, philosophically probing, and verbally acrobatic, The Life of the World to Come announces Dan Cluchey as a fresh new voice in fiction.

From a beguiling new voice, an irresistible debut novel--which Jonathan Safran Foer calls as "lyrical as a poem, psychologically rich as a thriller."

In the beautiful, barren landscape of the Far North, under the ever-present midnight sun, Frances and Yasha are surprised to find refuge in each other. Their lives have been upended--Frances has fled heartbreak and claustrophobic Manhattan for an isolated artist colony; Yasha, a Russian immigrant raised in a bakery in Brighton Beach, arrives from Brooklyn to fulfill his beloved father's last wish: to be buried "at the top of the world." They have come to learn how to be alone.

But in Lofoten, an archipelago of six tiny islands in the Norwegian Sea, ninety-five miles north of the Arctic Circle, they form a bond that fortifies them against the turmoil of their distant homes, offering solace amidst great uncertainty. With nimble and sure-footed prose enriched with humor and warmth, Dinerstein reveals that no matter how far we travel to claim our own territory, it is ultimately love that gives us our place in the world.

This shattering novel is filled with storytelling sleight of hand. What appears to be a story of mothers and daughters, of sisterhood put to the test, of adolescent love and grown-up misconduct, and of history’s long reach, becomes a provocative and compelling exploration of America’s failure to find a language to talk about race.

For Hunter Cady, meeting Kait was the greatest thing that ever happened to him. Otherwise unmotivated, he spent roughly half his twenty-nine years accomplishing very little, which makes him about fifteen in terms of real-life experience. But he’s the luckiest man on earth when it comes to his wife. Beautiful and confident, Kait is somehow charmed by Hunter’s awkwardness and droll humor. So when she dies quite suddenly, Hunter is crushed. Numb with grief, he stumbles forward the only way he knows how: by running away. To the dismay of her family, Hunter takes Kait’s ashes with him and heads west.

They had always meant to travel. Soon enough, he finds himself--and Kait--in encounters with characters even quirkier than he is: an overzealous Renaissance Faire worker; a raucous yet sympathetic troop of bachelorettes; a Chicago couple and their pet parrot, Elvis. He meets a much older man still searching for the wife who walked out on him years ago. Along the way are glimpses of Hunter and Kait’s beautiful, flawed, very real marriage and the strength it gives Hunter, even when contemplating a future without it. Insightful, wry, and sometimes laugh-out-loud funny, The Young Widower’s Handbook is a testament to the power of love.

In this masterful, enthralling debut novel about fate and family history, a young woman sees the truth about people written on their skin.

Magdalena has an unsettling gift. She sees writing on the bodies of everyone she meets—names, dates, details both banal and profound—and her only relief from the onslaught of information is to take off her glasses and let the world recede. Mercifully, her own skin is blank.

When she meets Neil, she is intrigued to see her name on his cheek. He’s in Paris for the summer, studying a medieval pilgrimage to the rocky coast of Spain, where the body of Saint Jacques was said to have washed ashore, covered in scallop shells. Desperate to make things right after her best friend dies—a loss she might have prevented—Magdalena embarks on her own pilgrimage, but not before Neil falls for her, captivated by her pale eyes, charming Eastern European accent, and aura of heartbreak.

Neil’s father, Richard, is also in Paris, searching for the truth about his late mother, a famous expatriate American novelist who abandoned him at birth. All his life Richard has clung to a single striking memory—his mother’s red shoes, which her biographers agree he never could have seen.

Despite misunderstandings and miscommunications, these unforgettable characters converge, by chance or perhaps by fate, and Magdalena’s uncanny ability may prove to be the key to their happiness. Indelible pulses with humanity and breathes life into unexpected fragments of history, illustrating our urgent need to connect with others, and the past.