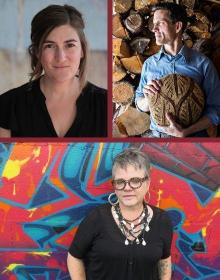 ABOUT GOODNIGHT STRANGER AND MICIAH BAY GAULT:
Lydia and Lucas Moore are in their late twenties when a stranger enters their small world on Wolf Island. Lydia, the responsible sister, has cared for her pathologically shy brother, Lucas, ever since their mom's death a decade before. They live together, comfortable yet confined, in their family house by the sea, shadowed by events from their childhood. When Lydia sees the stranger step off the ferry, she feels an immediate connection to him. Lucas is convinced the man, Cole Anthony, is the reincarnation of their baby brother, who died when they were young. Cole knows their mannerisms, their home, the topography of the island--what else could that mean? Though Lydia is doubtful, she can't deny she is drawn to his magnetism, his energy, and his warmth. To discover the truth about Cole, Lydia must finally face her anxiety about leaving the island and summon the strength to challenge Cole's grip on her family's past and her brother. A deliciously alluring read, Goodnight Stranger is a story of choices and regrets, courage and loneliness, and the ways we hold on to those we love.

Miciah Bay Gault grew up on Sanibel Island, Cape Cod, and other beautiful places. Her stories and essays have been published in Tin House, The Sun, The Southern Review, Agni, The Literary Review, and in the anthology Contemporary Vermont Fiction. A graduate of the Syracuse MFA program, she now teaches in the MFA in Writing & Publishing at Vermont College of Fine Arts, and is coordinator of the Vermont Book Award. She lives in Montpelier, VT with her husband, three kids, and some backyard chickens.

ABOUT FIVE MIDNIGHTS AND ANN DÁVILA CARDINAL:
Ann Dávila Cardinal's Five Midnights is a “wickedly thrilling” (William Alexander) and “flat-out unputdownable” (Paul Tremblay) novel based on the el Cuco myth set against the backdrop of modern day Puerto Rico.
Five friends cursed. Five deadly fates. Five nights of retribución.
If Lupe Dávila and Javier Utierre can survive each other’s company, together they can solve a series of grisly murders sweeping though Puerto Rico. But the clues lead them out of the real world and into the realm of myths and legends. And if they want to catch the killer, they'll have to step into the shadows to see what's lurking there—murderer, or monster?

Ann Dávila Cardinal is a novelist and Director of Recruitment for Vermont College of Fine Arts (VCFA) where she also earned her MFA in Writing. She comes from a long line of Puerto Rican writers, including poets Virgilio and José Antonio Dávila, and her cousin, award-winning fiction writer Tere Dávila. Ann lives in Vermont with her husband Doug where she needle felts small reading creatures, and bikes four seasons a year. Five Midnights is her first solo novel.

ABOUT BREAKING BREAD AND MARTIN PHILIP:
A brilliant, moving meditation on craft and love, and an intimate portrait of baking and our communion with food—complete with seventy-five original recipes and illustrated with dozens of photographs and original hand-drawn illustrations—from the head bread baker of King Arthur Flour. Breaking Bread is an intimate tour of Philip’s kitchen, mind, and heart. Through seventy-five original recipes and life stories told with incandescent prose, he shares not only the secrets to creating loaves of unparalleled beauty and flavor but the secrets to a good life. From the butter biscuits, pecan pie, and whiskey bread pudding of his childhood in the Ozarks to French baguettes and focaccias, bagels and muffins, cinnamon buns and ginger scones, Breaking Bread is a guide to wholeheartedly embracing the staff of life. Philip gently guides novice bakers and offers recipes and techniques for the most advanced levels. He also includes a substantial technical section covering the bread-making process, tools, and ingredients. As he illuminates an artisan’s odyssey and a life lived passionately, he reveals how the act of baking offers spiritual connection to our pasts, our families, our culture and communities, and, ultimately, ourselves. Exquisite, sensuous, and delectable, Breaking Bread inspires us to take risks, make bolder choices, live more fully, and bake bread and break it with those we love.

Martin Philip is the Head Bread Baker at King Arthur Flour in Norwich, Vermont. He holds a degree from Oberlin Conservatory, is a MacDowell fellow, and attended the New York Art Students League and the Cooper Union for drawing. His current life chapter—which includes three wonderful children with his wife, Julie Ness, ample time in the woods, and lots of crackling baguettes—is the best yet.