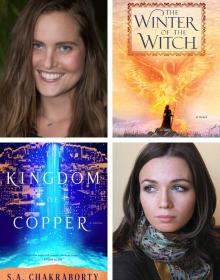 ABOUT THE BOOKS:
Reviewers called Katherine Arden’s novels The Bear and the Nightingale and The Girl in the Tower “lyrical,” “emotionally stirring,” and “utterly bewitching.”  The Winternight Trilogy introduced an unforgettable heroine, Vasilisa Petrovna, a girl determined to forge her own path in a world that would rather lock her away. Her gifts and her courage have drawn the attention of Morozko, the winter-king, but as The Winter of the Witch opens, it is too soon to know if this connection will prove a blessing or a curse.

In Kingdom of Copper, the second book of the Daevabad trilogy, S. A. Chakraborty continues the sweeping adventure begun in The City of Brass—"the best adult fantasy I’ve read since The Name of the Wind" (#1 New York Times bestselling author Sabaa Tahir)—conjuring a world where djinn summon flames with the snap of a finger and waters run deep with old magic; where blood can be dangerous as any spell, and a clever con artist from Cairo will alter the fate of a kingdom.

ABOUT THE AUTHORS:
Katherine Arden is the author of the national bestsellers The Bear and the Nightingale and The Girl in the Tower. Born in Austin, Texas, she has studied Russian in Moscow, taught at a school in the French Alps, and worked on a farm in Hawaii. She currently lives in Vermont.

S. A. Chakraborty is a speculative fiction writer from New York City. Her debut, The City of Brass, was the first book in the Daevabad trilogy. You can find her online at www.sachakraborty.com or on Twitter @SAChakrabooks.

The Winter of the Witch: A Novel (Winternight Trilogy #3) (Hardcover)

Following their adventures in The Bear and the Nightingale and The Girl in the Tower, Vasya and Morozko return in this stunning conclusion to the bestselling Winternight Trilogy, battling enemies mortal and magical to save both Russias, the seen and the unseen.

Now Moscow has been struck by disaster. Its people are searching for answers—and for someone to blame. Vasya finds herself alone, beset on all sides. The Grand Prince is in a rage, choosing allies that will lead him on a path to war and ruin. A wicked demon returns, stronger than ever and determined to spread chaos. Caught at the center of the conflict is Vasya, who finds the fate of two worlds resting on her shoulders. Her destiny uncertain, Vasya will uncover surprising truths about herself and her history as she desperately tries to save Russia, Morozko, and the magical world she treasures. But she may not be able to save them all.

Advance praise for Winter of the Witch

“Katherine Arden’s Winternight Trilogy isn’t just good—it’s hug-to-your-chest, straight-to-the-favorites-shelf, reread-immediately good, and each book just gets better. The Winter of the Witch plunges us back to fourteenth-century Moscow, where old gods and new vie for the soul of Russia and fate rests on a witch girl’s slender shoulders. Prepare to have your heart ripped out, loaned back to you full of snow and magic, and ripped out some more.”—Laini Taylor

The Kingdom of Copper: A Novel (The Daevabad Trilogy #2) (Hardcover)

Nahri’s life changed forever the moment she accidentally summoned Dara, a formidable, mysterious djinn, during one of her schemes. Whisked from her home in Cairo, she was thrust into the dazzling royal court of Daevabad—and quickly discovered she would need all her grifter instincts to survive there.

Now, with Daevabad entrenched in the dark aftermath of a devastating battle, Nahri must forge a new path for herself. But even as she embraces her heritage and the power it holds, she knows she’s been trapped in a gilded cage, watched by a king who rules from the throne that once belonged to her family—and one misstep will doom her tribe..

Meanwhile, Ali has been exiled for daring to defy his father. Hunted by assassins, adrift on the unforgiving copper sands of his ancestral land, he is forced to rely on the frightening abilities the marid—the unpredictable water spirits—have gifted him. But in doing so, he threatens to unearth a terrible secret his family has long kept buried.

And as a new century approaches and the djinn gather within Daevabad's towering brass walls for celebrations, a threat brews unseen in the desolate north. It’s a force that would bring a storm of fire straight to the city’s gates . . . and one that seeks the aid of a warrior trapped between worlds, torn between a violent duty he can never escape and a peace he fears he will never deserve.

“Chakraborty plunges right back into the action set up in The City of Brass [...] This intriguing fantasy series appears to be well on its way to an exciting conclusion.”
— Publishers Weekly (starred review)

“With gorgeous world building, compelling characters, and clashing schemes, the second in Chakraborty’s Daevabad trilogy will thrill her many fans.”
— Booklist (starred review)

“With a richly immersive setting and featuring complex familial, religious, and racial ties and divides, Chakraborty’s second book in the trilogy wraps readers in a lush and magical story that takes over all the senses.”
— Library Journal (starred review)

“It was a treat to return to Chakraborty’s richly drawn world. [...] engaging, satisfying, and left me looking forward to what comes next.”
— The Speculative Shelf