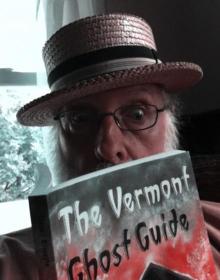 Join Joseph A. Citro, the Vermont author and folklorist who has been referred to as the "Bard of the Bizarre" and "the Ghost-Master General," for insight into the folklore, hauntings, ghost stories, paranormal activity and occult happenings of New England.

ABOUT THE AUTHOR: Joseph A. Citro has written five novels on supernatural themes -- four of them based on actual New England history -- including Lake Monsters (1991 as Dark Twilight, UPNE 2001), The Gore (1990, UPNE 2000), and Guardian Angels (1988, UPNE 1999). He is also author of Green Mountains, Dark Tales (UPNE 1999), The Vermont Ghost Guide (UPNE 2000), Passing Strange (1996), and Green Mountain Ghosts, Ghouls, and Unsolved Mysteries (1994). A popular lecturer and teacher, his commentaries are heard regularly on public radio.