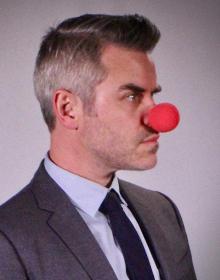 Onion River Press and Phoenix Books invite you to join in the launch celebration of Goes Without Saying, pictograms and pop-culture combined in a collection of brain-teasing visual puns by renowned icon designer, Jory Raphael.

ABOUT THE BOOK: Goes Without Saying uses original pictograms to form movie titles, book titles, sayings, and general pop-culture references. Fun for the whole family. Includes an answer key in the back, but don't cheat unless you have to!

An icon is a pictorial representation of the product it stands for. Using only simple shapes and lines, an icon of a house must capture and represent the essence of every house. But even the simplest of things can complicate if one puts their mind to it. Within the pages of Goes Without Saying Jory Raphael's icons take on new meaning, they create unique and unexpected – often literal – visual puns. They masquerade as metaphors, impersonate popular titles and simulate secret agents. Some may tease the brain, some may go without saying, some may even make you smile.

ABOUT THE AUTHOR: Jory Raphael is a designer, illustrator, and occasional actor. He's the lead icon designer at Font Awesome, the co-founder of Notabli, and the creator of Symbolicons. His work has been used by many amazing companies over the years, including Apple, Pepsi, Sesame Street, and more.

Fun fact: Jory once had a joke about toilet paper go viral on Twitter.