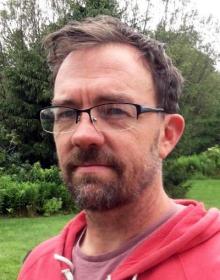 Join Jason Lutes for a talk on his new book, Berlin. Twenty years in the making, this sweeping masterpiece charts Berlin through the rise of Nazism.

ABOUT THE BOOK: During the past two decades, Jason Lutes has quietly created one of the masterworks of the graphic novel golden age. Serialized in twenty-two issues, collected in two volumes, with a third to be released at the same time as this omnibus, Berlin has more than 100,000 copies in print and is one of the high-water marks of the medium: rich in its well-researched historical detail, compassionate in its character studies, and as timely as ever in its depiction of a society slowly awakening to the stranglehold of fascism.

Berlin is an intricate look at the fall of the Weimar Republic through the eyes of its citizens—Marthe Müller, a young woman escaping the memory of a brother killed in World War I, Kurt Severing, an idealistic journalist losing faith in the printed word as fascism and extremism take hold; the Brauns, a family torn apart by poverty and politics. Lutes weaves these characters’ lives into the larger fabric of a city slowly ripping apart.

The city itself is the central protagonist in this historical fiction. Lavish salons, crumbling sidewalks, dusty attics, and train stations: all these places come alive in Lutes’ masterful hand. Weimar Berlin was the world’s metropolis, where intellectualism, creativity, and sensuous liberal values thrived, and Lutes maps its tragic, inevitable decline. Devastatingly relevant and beautifully told, Berlin is one of the great epics of the comics medium.

“With its rich sense of time and place, nuanced portrayal of individual destinies, precisely rendered imagery, and poetic expression of themes, Jason Lutes’s Berlin is truly a masterful narrative.”
—Amor Towles, A Gentleman in Moscow

“A watershed achievement—Berlin charted new territory for the graphic novel and comics at the same time, at once a story about artists trying to make art during the rise of the Nazis in Germany, and a bildungsroman of the first order. This landmark collection returns this story to us now when we need examples of how to stay human to each other in the face of a politics that turns friends into enemies—a newly necessary book.”
—Alexander Chee, The Queen of the Night

ABOUT THE AUTHOR:  Jason Lutes was born in New Jersey in 1967 and grew up reading American superhero and Western comics. In the late 1970s he discovered Heavy Metal magazine and the tabletop role-playing game Dungeons & Dragons, both of which proved major influences on his creative development. Lutes graduated from the Rhode Island School of Design with a BFA in illustration, and in 1993 he began drawing a weekly comics page called Jar of Fools for Seattle’s The Stranger. Lutes lives in Vermont with his partner and two children, where he teaches comics at the Center for Cartoon Studies.