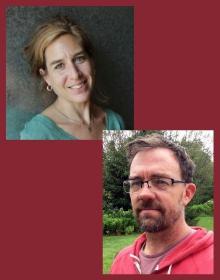 Join Glynnis Fawkes and Jason Lutes for a conversation about telling the stories of Charlotte Brontë and Harry Houdini. Charlotte Brontë before Jane Eyre  and Houdini: The Handcuff King - both presented by the Vermont's own Center for Cartoon Studies - are both written for grades 5-9, but all ages will enjoy these vibrant and accessible biographies.

ABOUT GLYNNIS FAWKES & CHARLOTTE BRONTE BEFORE JANE EYRE:
Charlotte Brontë's Jane Eyre is a beloved classic, celebrated today by readers of all ages and revered as a masterwork of literary prowess. But what of the famous writer herself?

Originally published under the pseudonym of Currer Bell, Jane Eyre was born out of a magnificent, vivid imagination, a deep cultivation of skill, and immense personal hardship and tragedy. Charlotte, like her sisters Emily and Anne, was passionate about her work. She sought to cast an empathetic lens on characters often ignored by popular literature of the time, questioning societal assumptions with a sharp intellect and changing forever the landscape of western literature.

With an introduction by Alison Bechdel, Charlotte Brontë before Jane Eyre presents a stunning examination of a woman who battled against the odds to make her voice heard.

ABOUT JASON LUTES AND HOUDINI: THE HANDCUFF KING:
Harry Houdini mesmerized a generation of Americans when he was alive, and continues to do so over ninety years since his death. This is a snapshot of Houdini's life, centering on one of his most famous feats. As Houdini prepares for a death-defying leap into the icy Charles River in Boston, biographer Jason Lutes and artist Nick Bertozzi reveal Houdini's life and influence: from the anti-Semitism Houdini fought all his life, to the adulation of the American public; from his hounding by the press, to his loving relationship with his wife Bess; from his egoism to his insecurity; from his public persona--to the secret behind his most amazing trick! And it's all in graphic form, so it's fresh, original, and unlike anything previously published about this most fascinating of American showmen.

Jason Lutes has been an admirer of Houdini for most of his adult life, and his celebrated graphic novel for adults, Jar of Fools, also pays homage to the Handcuff King. His most recent book is Berlin. Jason lives in Vermont with his partner and two children, where he teaches comics at the Center for Cartoon Studies.