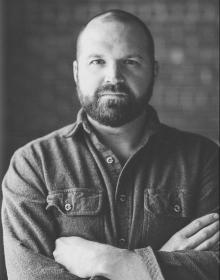 Join Dave Patterson to celebrate the launch of his new novel, Soon the Light Will Be Perfect.  The event will also feature live music by Andrew James.

ABOUT THE BOOK:  We the Animals meets Hillbilly Elegy in this taut portrait of poverty, Catholicism, and a family in crisis in rural Vermont.

A 12-year-old altar boy lives with his family in a small, poverty stricken town in Vermont. His father works at a manufacturing plant, his mother is a homemaker, and his fifteen-year-old brother is about to enter high school. His family has gained enough financial stability to move out of the nearby trailer park, and as conflict rages abroad, his father’s job at a weapons manufacturing plant appears safe. But then his mother is diagnosed with cancer, and everything changes.

As his family clings to the traditions of their hard-lined Catholicism, the narrator begins to see how ideology and human nature are often at odds. He meets Taylor, a perceptive, beguiling girl from the trailer park, a girl who has been forced to grow up too fast. Taylor represents everything his life as an altar boy isn’t, and their fledgling connection develops as his mother’s health deteriorates.

Set over the course of one propulsive summer, Soon the Light Will be Perfect chronicles the journey of a young man on the cusp of adulthood, a town battered by poverty, and a family at a breaking point. In spare, fiercely honest prose, Dave Patterson captures what it feels like to be gloriously, violently alive at a moment of political, social, and familial instability.

ABOUT THE AUTHOR:  Dave Patterson is an award-winning fiction writer, journalist, musician and high school English teacher. He received his MA in English from the Bread Loaf School of English and an M.F.A. from the University of Southern Maine’s Stonecoast program. His writing has appeared in The Burlington Free Press, Vermont Life Magazine, The Portland Press Herald, Maine Magazine, Portland Magazine, among others He writes a weekly beer column for Maine Today. He lives outside Portland, Maine, with his wife, two kids, and dog.

ABOUT THE MUSICIAN:  Andrew James is a singer/songwriter from Northern Vermont.  He has been playing in the Burlington music scene since the early 2000’s. He was a songwriter and frontman for the Burlington band, Citizen Bare, from 2007 - 2015.  Andrew's original songs are influenced by an eclectic mix of genres, ranging from folk to hip-hop, country to punk. Andrew James is currently fronting the trio, The Owl Stars. They can be seen at various venues in the greater Burlington area.

Soon the Light Will Be Perfect (Hardcover)