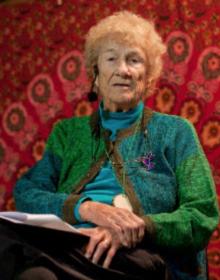 Join Cardy Raper for a talk on her new book, Love, Sex, and Mushrooms.

ABOUT THE BOOK: When a young girl, Cardy Raper told her mother, “When I grow up I want to be a scientist and make grand discoveries!” Her mother responded, “You could become a nurse.” Science was a man’s world then. Cardy refused to take “no” for an answer.
Her dream seemed attainable when she met her mentor, Professor John “Red” Raper at the University of Chicago who said “Yes, you can be a scientist!” They became soul mates, fell in love, married, parented children, moved to Harvard, and did research together on the versatile sex life of fungi.
Red’s untimely death left Cardy alone in the competitive world of cutting-edge science. She carried on, obtained a doctoral degree, learned the techniques of molecular genetics, and established her own laboratory where she conducted pioneering research on the genetic and molecular determinants of sexual reproduction in a mushroom-bearing fungus with 20,000 different sexes. This fungus has served as a model organism for exploring the way in which sensing molecules, such as pheromones, function to communicate in more complex organisms.

This fully-illustrated book is intended for lay readers, including scientists who are unfamiliar with fungi. Scientific jargon is avoided whenever possible. Numerous illustrations are included to enhance the text. The personal story woven into this memoir includes in-depth descriptions of associates—from lab techs to Nobel Laureates—who sustained the author's passion for her academic life in science.

ABOUT THE AUTHOR: Cardy Raper received a Masters in Science degree from The University of Chicago and a PhD from Harvard University. She has been extensively published in national and international scientific journals and was named a University of Vermont Research Professor Emerita in Microbiology and Molecular Genetics. She was recently honored by being elected Fellow of the American Association for the Advancement of Science. She is the author of A Woman of Science: An Extraordinary Journey of Love, Discovery, and the Sex Life of Mushrooms.

Love, Sex & Mushrooms: Advenutres of a Woman in Science (Paperback)