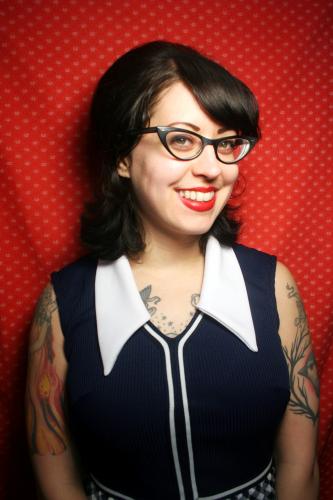 A heartfelt, funny, and beautiful memoir comic in the tradition of Fun Home, Calling Dr. Laura heralds the arrival of a winning new voice in graphic literature. The hip and quirky Calling Dr. Laura opens when up-and-coming artist Nicole Georges discovers that her presumed-dead father is actually alive, something her entire family had kept from her for years. But Nicole’s been keeping something from her family, too: she’s gay. With a supporting cast of friends, girlfriends, rescued dogs, pet chickens, and the occasional curmudgeonly radio host (yes, that Dr. Laura), Nicole figures out how to confront—and come out to—a mother she no longer trusts.

Recently named a “New Queer Voice to Watch Out For” by the Lambda Literary Foundation, Nicole is a passionate, frank, and utterly charming narrator. She shares her triumphs and foibles alike with sweet illustrations and a relatable voice. Watch her unbelievable story unfold in words and pictures in this must-read mainstream debut!

Nicole J. Georges has been creating autobiographical art for many years. She’s a ’zinester, illustrator, and pet-portrait artist whose work has appeared in magazines and anthologies nationwide. She teaches self-publishing and autobiographical-comic workshops to seniors and children, and her independent comics have been collected in the anthology Invisible Summer.

Cassie J Sneider is the author of the life-changingly hilarious memoir Fine Fine Music, a memoir about growing up on Long Island, getting into rockandroll, and having many minimum-wage jobs along the way. She has been touring and performing around the country with comics and zines since 2008, and she hosts a monthly storytelling series called THE WORST! in Brooklyn and San Francisco.

“An engrossing, lovable, smart and ultimately poignant trip through a harrowing emotional bottleneck in family life. It's great art, great writing, a great story – I can't wait for what's next from Nicole. What a wonderful book.” — Rachel Maddow

“Engaging...incisive...The author approaches [her story] with the tenacity of a detective.” —Publishers Weekly

“A riveting family mystery. There’s a powerful chemistry going on between Georges’s delicate drawings and the probing honesty of her investigations. Calling Dr. Laura is disarming and haunting, hip and sweet, all at once.” —Alison Bechdel