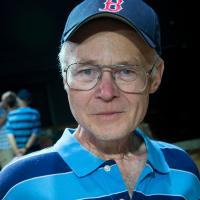 Join Bill Lockwood for a talk on his new novel, Ms. Anna.

ABOUT THE BOOK:  Anna, a twenty-something college graduate, is without a job comparable to her education. She works as a part-time bartender and also as pilot of her father’s fishing boat in Mayaguez, Puerto Rico, a city proclaiming itself “the tuna canning capital of the world” in the 1990s. Max is an academic who was maybe once in the CIA. He is a member of a staid, wealthy New England lobstering family that has branched out to buy one of the Mayaguez tuna plants. When word reaches them (thanks to Anna) of some “fishy” activities regarding their latest acquisition, they send Max to investigate. Anna and Max would rather find out more about each other, but in no time they are embroiled in a high-seas smuggling run, tracked by the U.S. Coast Guard. The bad guy has an assault rifle in his trombone case, so it’s not your parents’ Caribbean cruise—romance will have to wait.

ABOUT THE AUTHOR:  Bill Lockwood was born in Baltimore, Maryland,. and moved to southeastern Vermont and Bellows Falls in the early 1990s. Recently retired, by day he was a social services worker for the States of Maryland and Vermont. By night he was active in non-professional theater, doing mostly tech work and publicity but having directed six major productions in Baltimore. In Vermont, he was the longest serving Chairman of the Bellows Falls Opera House Restoration Committee and was honored for his work by being chosen 2006 Great Falls Regional Chamber of Commerce Person of the Year. He has recently worked back stage with Main Street Arts, River Theater Co., and is publicist for the Walpole players. As a writer in Baltimore he wrote feature stories and reviews in “Stage Right”, a community theater newsletter in the 1980s. In Vermont, he had four short stories published in obscure literary magazines in the early 1990s and wrote articles covering the arts, personalities, and rural downtown development in the Bellows Falls (VT ) Town Crier from 1998 through 2006. He also wrote articles for other local publications including the early Brattleboro Commons and some Vermont tourist magazines. Currently he contributes free lance to The Eagle Times, The Shopper/Vermont Journal, and the Walpole Clarion. His first novel, Buried Gold was released by The Wild Rose Press in 2016, Megan of the Mists in 2017, and Ms. Anna in 2018. All are historical fiction. Recently, he and his wife of 38 years moved form Vermont to North Walpole, New Hampshire, just across the Connecticut River from Bellows Falls.