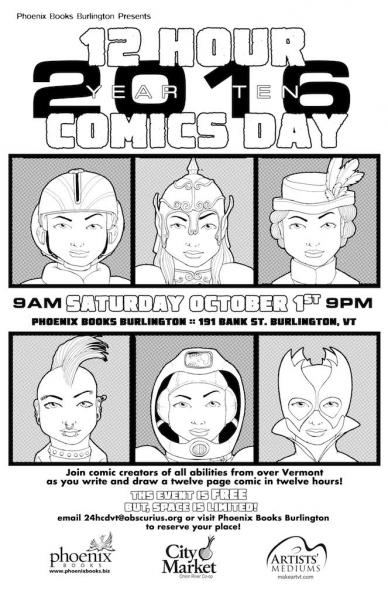 24-Hour Comics day, the fun and possibly grueling challenge for comic artists and writers world-wide is back… sort of! This year's event, hosted by Phoenix Books and Richard Evans, is going to be a twelve-hour event on October 1, 2016 from 9AM to 9PM. A full twelve consecutive hours of comics making! Phoenix is proud to be the new home of the longest running 24HCD in Vermont as it celebrates its tenth year.

Artists of all abilities and styles ages thirteen and up are invited to push themselves to their physical and creative limits in this singular artistic challenge. 24-Hour Comics Day is the brainchild of Scott McCloud (author of Understanding Comics and Making Comics) as an exercise to break creative blocks.

THE CHALLENGE: To create a complete 12 page comic book in 12 continuous hours. (The original challenge was for 24 pages in 24 hours.)

Complete means everything: Story, finished art, lettering, colors (if you want 'em), paste-up, everything! Once pen hits paper, the clock starts ticking.12 hours later, the pen lifts off the paper, never to descend again. Even proofreading has to occur in the 12 hour period. (Computer-generated comics are fine of course, same principles apply.) The 12 hours are continuous. You can take a nap if you like, but the clock will continue to tick!

If you get to 12 hours and you're not done, either end it there ("the Gaiman Variation") or keep going until you're done ("the Eastman Variation"). Both of these are considered "the Noble Failure Variants" and true 12 hour comics in spirit; but you must sincerely intend to do the 12 pages in 12 hours at the outset.

DATE:  Saturday, October 1st from 9am to 9pm

ADMISSION:  The event is free and open to comic artists of all abilities over age thirteen. Anyone interested in accepting this singular challenge should email their name, address and telephone number to 24hcdvt@obscurius.org. Space is limited, so sign up today!

This event is cosponsored by Phoenix Books, City Market, and Artists' Mediums.