Will became an avid reader at a young age (thanks to the daring adventures of those master sleuths Frank and Joe Hardy) and has attempted to build a life around books ever since. In addition to working at Phoenix Books as a bookseller, he has worked as a book editor for over thirteen years. He is also a frequent speaker at writers' workshops and literary festivals.

He is a lifelong resident of Rutland, Vermont and currently serves in local government as the president of the Rutland City Board of Aldermen. He lives in a book-filled home with his wife Alison, three children, two dogs, five cats, and a rabbit.
Reviewed by:
Will

I have always been a fan of team-ups. As a kid reading comics I could take or leave Iron Man and Thor but put them in an Avengers book with a handful of other heroes and I’d gladly part with my allowance money every month. This book teams up classic children’s book characters Dorothy (Wizard of Oz), Wendy Darling (Peter Pan), and Alice (Alice in Wonderland), bringing them together in a school for gifted youngsters like a 1910 era X-Men.

This is a fun, rollicking, world hopping adventure. Some liberties are taken with the characters – Wendy Darling looks like she would be more at home handing out Riot Grrl fanzines in Portland than traipsing about turn of the century England – but I’m a firm believer that if you want classic characters to live on you need to allow them to evolve with the times.

The action and drama come quick, making the book feel a bit rushed at times, but overall this is an enjoyable all-ages read, easily finished in one sitting. If it makes any young (or old) readers seek out these characters in their original books that would be an excellent bonus.

I especially enjoyed the girls’ nanny, an unnamed (because still under copyright) but startlingly creepy take on Mary Poppins. And Peter Pan’s reactions after being aged by eating Wonderland berries and thrust into puberty after centuries as a boy added a good dose of humor to the tale.

Overall I’d recommend this as an all-ages option for readers looking for further adventures of these classic characters or just in search of a fun standalone adventure. Some parents might not want to give it to very young readers – violence is depicted and profanity (in the form of grawlixes) is used for humorous effect – but that is a matter of personal preference. I have no qualms about reading this with my seven-year-old daughter and think it will make a good introduction for her to these characters.

Monsters You Should Know: (Book about Monsters, Monster Book for Kids) (Hardcover)

I love this book. It is a collection of absolutely adorable illustrations of monsters with information about the absolutely horrifying ways they will kill you.

Instead of focusing a narrow light, the book includes monsters from legends from around the globe. A few are pitiful, which nicely adds an unexpected element to the book when they are featured, but most are straight up killers: carnivorous unicorns, beasts that tickle their victims to death, and sea creatures just waiting for a disobedient child to wander past.

It is a beautifully illustrated, quick read cryptid bestiary.

The audience for this one may be a tad limited. The right child will be fascinated—I cautiously showed one entry to my six-year-old daughter and she insisted we sit and read the entire book—but for a more timid child this could be nightmare fuel. Less nervous fans of Fantastic Beasts and other mythical bestiaries should have this on their shelf.

This book was so much fun! With four decades of comics reading under my belt, this book is exactly what I am looking for in a graphic novel: an optimistic hero, a dash (strong dash) of silliness, and world saving adventures.

As a parent of daughters I also find it a consistent annoyance that so many female superheroes are portrayed in such a questionable manner. I’ve lost count of the number of team books with bulky male heroes clad in head to toe armor, while the wispy female heroes often seem to place cleavage and bare legs at the top of their costume must have list. So having Squirrel Girl be a strong lead, with a realistic costume and body proportions is a real plus. It is nice to have an entertaining comic I can share with my young daughter without qualms. The book reprints the first four issues of the comic book series and includes the letters pages from the comics. Normally this would strike me as annoying filler, but Squirrel Girl is such a revolutionary, affirming character that in this instance it is enjoyable to share in the excitement of other readers discovering the series and building a community.

The book abounds in novel ideas. That necessary recap of the previous issue that comics can’t seem to escape? Done here as a series of tweets that are so fun I would miss them if recaps were deemed unnecessary.

Additionally, any comic book, whether it is technically a solo title or not, is essentially a team book—a good supporting cast makes or breaks a book with a fringe lead. This book is off to a good start with SG’s roommate Nancy Whitehead. Nancy is a well-written, quirky, not-quite-everyman. She provides a fine snarky counterbalance to Squirrel Girl’s naïve optimism.

This book is tied into Marvel Comics regular continuity. This is a plus and a minus. As a long-time comics reader I love the way the author is playing with the Marvel Universe here with a unique but faithful rendering. After this arc I will never look at Galactus the same again. It took a character I didn’t previously care much about and really redefined him in a way I supremely enjoyed. However, this book tosses three long-time Marvel villains into the mix, all of whom have fairly significant back-stories. Newer readers, especially younger ones, may be a little confused as to the whos and whats of some of the characters in play. Squirrel Girl would benefit from having some original villains without so much Marvel baggage.

At the end of the day though, I strongly recommend this to anyone who likes some comedy in their comics; readers in search of positive, female leads; and any fan of the Marvel Universe—it is worth a read to see just how much the envelope of existing continuity can be pushed while remaining faithful to decades of comics history. I will definitely read future volumes of this series.
--Will

Outcast by Kirkman & Azaceta Volume 1: A Darkness Surrounds Him (Paperback)

This is a well-done, thoroughly creepy start to a new series involving demonic possession with the main character agonizing over and then attempting to solve the question of why demons seem determined to get to him through the people he loves.

The artwork pairs perfectly with the narrative to set the tone, making this a great book to read in one sitting, late at night, under the light of a single lamp.

The main characters are fleshed out in their portrayal as flawed human beings who are attempting to get a handle on the unexplainable. They know they are in over their heads but do not realize just how incredibly badly. I like these characters and want to see them succeed, I want to see them victorious, but given the nature and the power of what they are up against I just do not see that happening.

So I will keep reading—with a sense of dread for what is to come, with a strong desire to know what comes next. I finished this volume and immediately ordered the next.

I recommend this to anyone with an interest in non-superhero comics or a taste for horror stories. A generous amount of gore and sex does make this inappropriate for younger readers, but mature middle school readers and up should be able to handle the contents with just a few nightmares and lingering moments peering cautiously into dark shadows. 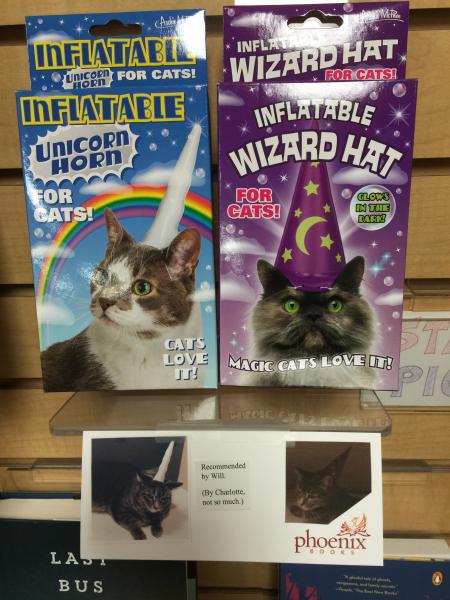 Becoming Nicole: The Transformation of an American Family (Hardcover)

This is a wonderfully written book about a husband and wife that adopt identical twin boys only to discover that one identifies as female. While examining the issues and contraversies from all sides, this is "compassionate journalism" at its best and the account of the family as they evolve from their initial confusion to a determination to protect their daughter and help her through her transition is moving. This could be a wonderful roadmap for families facing similar issues or inspiration for any parent (or sibling) who loves a child that does not conform to society's norms.