Join us in welcoming Madeleine M. Kunin to Phoenix Books Burlington!  She'll discuss her new book, The New Feminist Agenda: Defining the Next Revolution for Women, Work, and Family.  Copies of the book will be available to purchase and have signed by Kunin.

Madeleine M. Kunin was the first woman governor of Vermont and the first woman in the U.S. to serve three terms as governor. She served as Deputy Secretary of Education and Ambassador to Switzerland in the Clinton administration. Kunin is the author of The New Feminist Agenda; Pearls, Politics and Power; and Living a Political Life. She is also a Marsh professor at the University of Vermont, a commentator on Vermont Public Radio, and founder and board member of the global Institute for Sustainable Communities (ISC), a nongovernmental organization focused on climate change and civil society. She lives in Burlington, Vermont with her husband, John Hennessey.

About The New Feminist Agenda: Feminists opened up thousands of doors in the 1960s and 1970s, but decades later, are U.S. women where they thought they’d be? The answer is a resounding no.

Women now comprise nearly 60 percent of college undergraduates and half of all medical and law students. They have entered the workforce in record numbers, making the two-wage-earner family the norm. While women changed, however, social structures surrounding work and family remained static. Affordable, high-quality childcare, paid family leave, and equal pay for equal work remain elusive for most women. The U.S. has also fallen far behind other countries on the gender-equity front with fewer women holding federal offices and leading the nation’s top private companies.

It’s time, says former U.S. Ambassador and Governor Madeleine M. Kunin, to change that and usher in a new social revolution. Our inability to invest in families leaves us vulnerable to being reduced to second-rate status in the global economy.

Looking back over five decades of advocacy, Kunin analyzes where progress stalled, examines the successes of other countries, and charts the course for the next feminist revolution—one that mobilizes women, and men, to call for the kind of government and workplace policies that can improve the lives of women and strengthen their families.

The New Feminist Agenda: Defining the Next Revolution for Women, Work, and Family (Hardcover)

Please Note:  This event has been cancelled.  We hope to reschedule it for later this summer.

John Katzenbach, author of the psychological thriller What Comes Next, will visit Phoenix Books Burlington to discuss and read from his new novel.

John Katzenbach is the New York Times bestselling author of nine previous novels: the Edgar Award-nominated In the Heat of the Summer, which was adapted for the screen as The Mean Season; The Traveler; Day of Reckoning; Just Cause, which was also made into a movie; The Shadow Man (another Edgar nominee); State of Mind; Hart's War, which was also a major motion picture; The Analyst; and The Madman's Tale. Katzenbach has been a criminal court reporter for The Miami Herald and Miami News and a featured writer for the Herald's Tropic magazine. He lives in western Massachusetts.

About What Comes Next: When a retired academician witnesses a lovely young woman snatched off the street, he is unsatisfied by the police response and vows to find her on his own. She has been kidnapped and held prisoner by a married couple who have started an exclusive website, named "What Comes Next," on which viewers can watch, in real time, what befalls their victims.
What befalls the pretty teenager at the hands of the depraved couple, as thousands follow every moment of her nightmare, provides one of the most terrifying novels of the year.

Praise for John Katzenbach:
"Few writers of crime fiction seem to understand the criminal mind as well as Katzenbach." --People


"What is so scary is that Katzenbach creates a fictional world that is very much like the one we live in now, only taken to a horrifying extreme." --USA Today


"Katzenbach is very good at world-building, and his imaginary Western Territory is frighteningly believable." --The Washington Post


"Katzenbach weaves a complex and intriguing mystery while at the same time illuminating a piece of history. I found myself caught in its grip within the first few pages." - Jonathan Harr, author of A Civil Action


"Katzenbach's wonderful, tense narrative flows effortlessly, drawing you deeper and deeper into a chilling atmosphere of evil, darkness, and shadows." --The Miami Herald

This event is free and open to the public.  Copies of What Comes Next will be available to buy and have signed by Katzenbach at the event.

What Comes Next (Hardcover)

Learn about pickling from Andrea Chesman, one of our favorite local cookbook authors!  Check out her new book, The Pickled Pantry: From Apples to Zucchini, 150 Recipes for Pickles, Relishes, Chutneys & More. Enjoy delicious samples from the pages of Andrea's book!


Andrea Chesman is a food writer and gardener and the author of several cookbooks, including "Recipes from the Root Cellar, Serving Up the Harvest, " and "Pickles and Relishes." A resident of Vermont, she has been a contributing editor for "Vermont Life "and "Edible Green Mountains."

Serving Up the Harvest: Celebrating the Goodness of Fresh Vegetables: 175 Simple Recipes (Paperback)

Make sure to join us at 2:00pm with Andrea Chesman.  Learn about pickling and her new book, The Pickled Pantry: From Apples to Zucchini, 150 Recipes for Pickles, Relishes, Chutneys & More. Enjoy delicious samples from the pages of this book!

Sarah Healy, author of Can I Get an Amen?, will visit Phoenix Books

Burlington to discuss and read from her new novel.

As an extra treat, attendees will be treated to free ice cream from Ben & Jerry's! (While supplies last!)

This event is free and open to the public.  Copies of Can I Get an Amen? will be available to buy and have signed by Healy at the event.

Can I Get an Amen? is about the way life can suddenly change and make us question all of our relationships--with our family, with our faith, and with our childhood dreams of how life would be. Growing up, Ellen Carlisle was a Christian: she went to Jesus camp, downed stale Nilla wafers at Sunday school, and never, ever played with Ouija boards.  In exchange, God took care of her.  He showed his love through expensive clothes, new cars and extended vacations.  Now, years later, with infertility pushing her marriage to the brink of divorce, Ellen finds herself unemployed and living with her right-wing, Born Again Christian parents in her suburban New Jersey hometown. The voice is wonderful and the story is funny while it tackles some tough situations.  With wit and warmth, Healy puts a new spin on love, faith and family--exploring the difficulties that arise from conflicting religious beliefs between loved ones and how the ties that bind us are not always what we expect them to be.

Sarah Healy lives in Williston with her busband and three sons, where she works in marketing consultancy.  Can I Get An Amen? is her first novel. You can learn more about her at sarah-healy.com and facebook.com/sarahhealyauthor.

Can I Get an Amen? (Paperback) 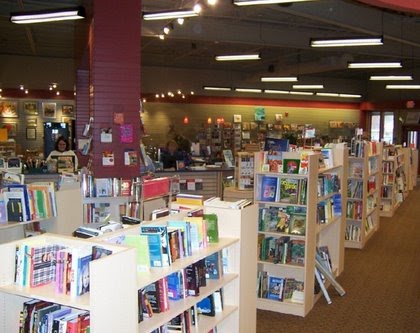 Added 4/24/2012: Thank you to all of the wonderful applicants who've expressed their enthusiasm for working at Phoenix Books over the past couple of months! We're no longer seeking applications (though you're always welcome to submit an application and resume for us to keep on file), and we're now moving on to training a fantastic new team of booksellers.

Permanent Part-time Positions Available. Weekends and Evenings A Must.

Phoenix Books is opening a new location in downtown Burlington, and we have a need for Book Sellers at that location. Bookselling experience a plus and retail experience helpful. The primary mission of a bookseller is to provide excellent customer service. In addition, the successful applicant will be comfortable around computers and point-of-sale systems, able to lift and move many boxes weighing 30-40 pounds and able to go up and down 6’ ladders. An interest in and appreciation for books and reading is critical to have.

We offer good pay, generous employee discounts and vacation in an awesome work environment. We seek motivated and energetic employees who possess these characteristics and skills: friendly; resourceful; well spoken; multitasking expert who is a good listener and fast learner; shows good judgment; takes initiative; and is willing to share in seemingly menial, but essential, tasks.