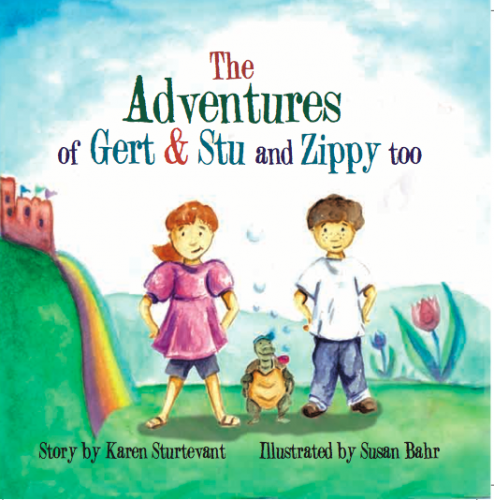 Join us for a special Saturday Story Time with children's author Karen Sturtevant and illustrator Susan Bahr!  Your little ones will love the story book The Adventures of Gert and Stu and Zippy Too.

Every parent knows how a simple cardboard box can become their child's favorite toy. Gert and Zippy are thrilled to have Stu, a new friend, join them in make-believe using Gert's adventure box. What happens when they land in a strange world and the box gets eaten by a dragon? How will they get home? Using creativity and bouncy rhymes these beautifully illustrated characters delight us with their story of friendship and remind us to appreciate the wonder of a child's imagination.

Karen Sturtevant is a freelance writer, member of the League of Vermont Writers, staff writer and editor-in-chief of Vermont Bride magazine. She's taught preschoolers when she experienced the wit and wonder that come with those magical years. This story, in part, started during that time and has developed over years with the character addition of her Russian tortoise, Zippy.

The Adventures of Gert & Stu and Zippy Too (Paperback) 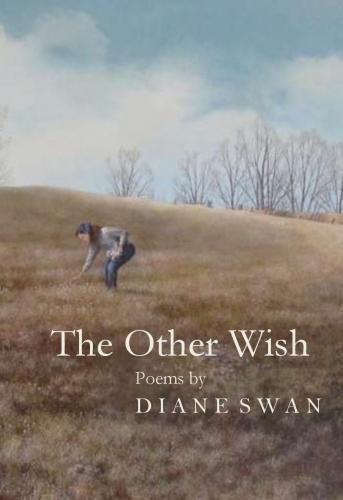 "Diane Swan writes about deceptively ordinary life in deceptively ordinary diction. I say “deceptively” because what makes the transparent language of her poems into poetry is a flawless sense of rhythm, proportion, and narrative that isn’t ordinary at all. Her poems go down like a glass of water that turns out to have been 180 proof vodka— in this case, the punch is pure emotion, most often emotion for someone else, about someone else, an emotion of concern or love, passionate and hard-won. They aren’t egotrapped in the theatre of her own mind. “We dare not be boring” wrote Marianne Moore, and Diane Swan never is, as we read the poem or when it’s finished. The turns in her poems— their shaping, the angles they take on experience— entertain me as much as individual details made palpable, all of it operating inside a live voice on the page talking about what matters to her as if she were sitting across from you at a table. Sir Philip Sidney, echoing Horace’s idea of the social function of poetry, said its purpose was “to teach and to delight.” This is what Diane Swan’s poems do. They are implicitly moral: like beautiful music, they teach us how to feel. Though she would never make this claim for herself, the world would be a better place if we all felt for others as unsentimentally and honestly as she does."
―Michael Ryan, The Boston Review

Diane Swan was born in Hartford, Connecticut. She and her husband moved to Vermont in 1970 where she attended Community College and received an Associate degree. She later earned a Master of Fine Arts degree in writing from Warren Wilson College. She has worked as a poet-in-the-schools, taught in the Step-Up program for women, the EXCEL pro-gram for gifted high school students, and on the faculties of the New England Young Writers Conference at Breadloaf, and the Champlain College Young Vermont Writers Conference. For over twenty years she facilitated writing workshops for residents in nursing homes, day centers and assisted living facilities. She lives in Barre, Vermont with her husband, artist Fred Swan. 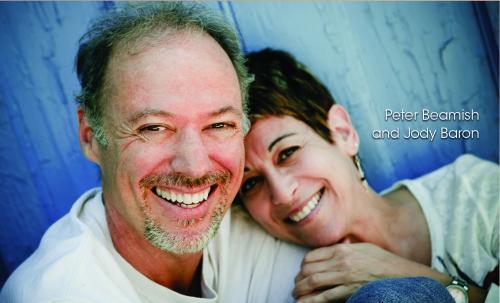 In a fast-paced culture where everything, even sex, is pared down to the bare minimum, it’s easy to forget that human connections can be emotional, significant, and even spiritual. In Spiritual Lovemaking: Relax into Sex & Awaken into Life, authors Jody Baron and Peter Beamish explain that by slowing down and embracing relaxation and mindfulness, we can create more fulfilling sexual experiences.

Baron and Beamish use an accessible, down-to-earth style to describe the practice of spiritual lovemaking, guiding readers through nine simple keys for unlocking the rejuvenating power of sexual energy. Every exercise is written with the beginner in mind; the book opens with a simple questionnaire to help examine your sex life, relationship, and daily routine, and then shares exercises on how to recharge, reinvigorate, or reinvent areas that lack passion and connection.

By working through the simple exercises in Spiritual Lovemaking, readers learn that by just simply learning to slow down and relax, they can improve their sex lives, deepen relationships, and increase awareness in all areas of life.

Jody Baron and Peter Beamish are quick to mention that they are not therapists, life coaches, or healers, but two people who figured out how to truly relax into the present moment, and want to teach others how easy it is to do the same. Baron has written over a dozen books as a ghostwriter of spiritual and New Age material, including books on tantric sex. She lives in Plainfield, Vermont. Beamish is a video producer and director with over twenty-five years of experience. He lives in Ottawa, Ontario.

By Jody Baron, Peter Beamish
Email or call for price.
ISBN: 9780738734316
Availability: Hard to Find
Published: Llewellyn Publications - January 8th, 2013
Listen to and enjoy stories with your little one!

Curious about what title(s) we'll be reading? Keep an eye out for
a posting on our Facebook page a few days before the event for all of the details.

This week we'll read My Dad Thinks He's Funny and make cards for the fathers in our lives! 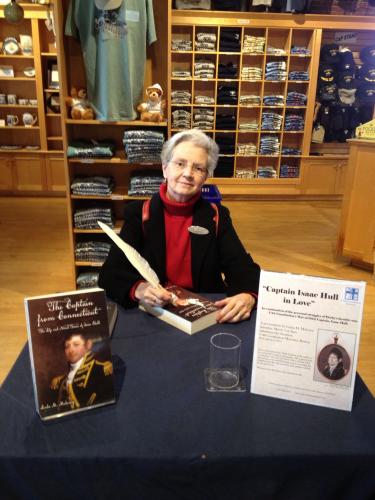 Join us for an event with Linda M. Maloney, a priest of the Episcopal diocese of Vermont and the Anglican diocese of Montreal. She has been a professor of U.S. history and of the New Testament, and will speak about her recently re-issued book, The Captain from Connecticut.

The Captain from Connecticut is the first definitive biography of the man who became a national hero when he commanded USS Constitution in the dramatic victory over HMS Guerrière in the War of 1812. Isaac Hull’s outstanding seamanship was in evidence throughout his career, but Maloney points out that Hull was actually the most pacific of men, and it is ironic that he is remembered for his tactical prowess during one naval battle. The famed battle against Guerrière is skillfully recounted with the verve and detailed attention that characterize the author’s approach to her subject. Drawing extensively on Hull’s correspondence and on contemporary naval records, she skillfully reconstructs Hull’s postwar life against the turbulent years of the first half of the nineteenth century.

“I am very impressed with this study and believe it will not be surpassed in its detailed portrait of Hull and the navy he served. The author has plumbed all the relevant documentary collections and secondary sources available. Hull’s career has been closely integrated with those of other principal naval officers of his time. His relationships with Silas Talbot, William Bainbridge, and John Rodgers are particularly well drawn. One learns as much about the challenges of navy life for Hull’s family as about the man himself, and peaceful times are given at least equal weight with periods of warfare. The book is a fine modern contribution to naval scholarship.” --William S. Dudley, former director of naval history for the U.S. Navy

The Captain from Connecticut: The Life and Naval Times of Isaac Hull (Paperback)

Listen to and enjoy stories with your little one!

I Dare You Not to Yawn (Hardcover) 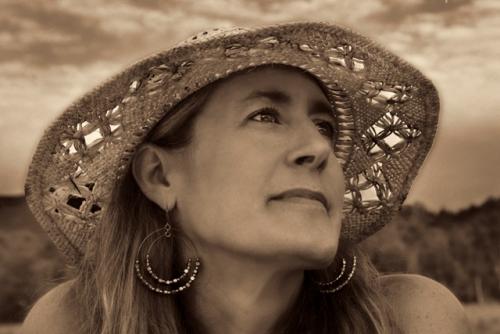 Join Adrie Kusserow for a reading from and discussion of her latest book, Refuge.  As an anthropologist, Adrie Kusserow’s ethnographic poetry probes culture and globalization with poems about Sudanese refugees based in Uganda, Sudan, and the United States, especially the “Lost Boys of Sudan.”

Adrie Kusserow is Professor of Cultural Anthropology at St. Michael’s College in Colchester, VT. She holds a Ph.D. in Social Anthropology from Harvard University and an M.A. in Comparative Religion from Harvard Divinity School. Her first poetry collection Hunting Down the Monk was published by BOA Editions in 2002 and carried a Foreword by Karen Swenson. Her most recent international fieldwork trips support girls’ education (South Sudan – www.Africaeli.org) and Youth Media Literacy and Gross National Happiness in Bhutan. She lives with her family in Underhill Center, Vermont, where she was born and raised.

This event is free and open to the public.  A portion of sales will be donated to Africa ELI.   Africa ELI builds gender equity, improved economic conditions, peaceful development and strengthened leadership capacity in South Sudan by advancing women’s education through academic sponsorships, partnerships, enrollment retention programs, and life-skills development.

As an anthropologist, Adrie Kusserow’s
ethnographic poetry probes culture and globalization with poems about
Sudanese refugees based in Uganda, Sudan, and the United States,
especially the “Lost Boys of Sudan.” The poet struggles with how to
respond to suffering, poverty, displacement, and the brutal aspects of
war. Much of this exploration is based in poems in which a mother is
also bringing her family to a larger global arena.

Join us in welcoming Reba White Williams, author of Restrike, to Burlington!

Reba White Williams has written articles for American Artist, Art and Auction, Print Quarterly, and Journal of the Print World. She served on the Print Committees of The Boston Museum of Fine Arts, The Museum of Modern Art, The Metropolitan Museum, and The Whitney Museum. She is a member of the Editorial Board of Print Quarterly, and an Honorary Keeper of American Prints at the Fitzwilliam Museum, Cambridge University. She currently lives in New York City and has recently founded the Willie Morris Award for best southern writing. She divides her time between New York, Connecticut and Palm Springs.

About the book: Cousins Coleman and Dinah Greene moved from North Carolina to New York after college to make their mark on the art world: Coleman is the editor of an influential arts magazine and Dinah is the owner of a print gallery in Greenwich Village. But their challenges are mounting as one of Coleman's writers is discovered selling story ideas to a competitor and The Greene Gallery is in the red because sales are down.
When billionaire Heyward Bain arrives with a glamorous assistant, announcing plans to fund a fine print museum, Coleman is intrigued and plans to get to know Bain and publish an article about him. Dinah hopes to sell him enough prints to save her gallery. At the same time, swindlers, attracted by Bain’s lavish spending, invade the print world to grab some of his money.
When a print dealer dies in peculiar circumstances, Coleman is suspicious, but she can’t persuade the NYPD crime investigator of a connection between the dealer’s death and Bain’s buying spree. After one of Coleman’s editors is killed and Coleman is attacked, the police must acknowledge the connection, and Coleman becomes even more determined to discover the truth about Bain. In an unforgettable final scene, Coleman risks her life to expose the last deception threatening her, her friends, and the formerly tranquil print world.