The Mark of Chaos and Creation: A YA Science Fiction-Fantasy Romance, Book 1 (The Mark of Creation Chronicles) (Hardcover) 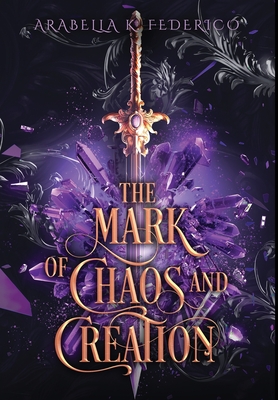 The Mark of Chaos and Creation: A YA Science Fiction-Fantasy Romance, Book 1 (The Mark of Creation Chronicles) (Hardcover)


Not in stock. At Our Partner Warehouse: Usually Ships in 4-7 Days
The Avengers meets Sailor Moon meets Arcane League of Legends in this mind-bending mashup of fantasy and science fiction in which a young woman must fight and lie and do whatever it takes to secure the thing she wants most: revenge. If you're in the market for something different on your bookshelf yet keeps the familiar tropes you love in fantasy fiction like enemies to lovers, forced proximity, fated mates, and found family, you'll obsess over The Mark of Chaos and Creation until the very last page.
Where do you draw the line between fighting for the greater good and vengeance?
Six years ago, seventeen-year-old Karalevine Ruzz watched the alien tyrants abduct her best friend as she narrowly escaped capture herself. Now, older and plagued by the loss of her friend, Kara must do whatever it takes to bring him home-but also bring him justice.
The Arianyte Empire must die.
But as Kara gets closer to the alien prince responsible for forcing her into being his mercenary, she quickly sees a different side of him-one that contradicts everything she knows to be true of Earth's wicked tyrant. As her feelings for him grow, she finds herself torn between her duty to the rebellion and her growing attraction to the alien prince. Meanwhile, Kara's fellow teammate, Ardelle Dawson, who has always bullied and dismissed her, finally realizes that he may have feelings for her, too. As Kara navigates this complex web of loyalty, duty, and love, she must decide which man she will choose-the dark-haired alien leader, or the fellow teammate who has finally come to his senses. Can she save her best friend and take back Earth, or will she be caught in the crossfire of this dangerous game of rebellion versus occupation?