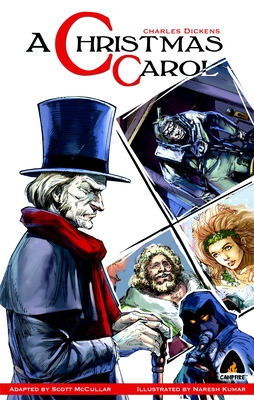 
Email or call for price.
A ghost turns up at Ebenezer Scrooge's home one Christmas Eve. It is Jacob Marley, his business partner, who has been dead for seven years. He is dragging heavy chains, and is obviously full of great sorrow and unbearable pain.

While Scrooge is still trying to decide whether the apparition is real or a piece of his imagination, Marley's ghost tells him something that might change his life forever:

'You will be haunted by three spirits. Without their visits, you cannot hope to avoid the path I tread.

'Expect the first tomorrow when the bell tolls one.

'Expect the second on the next night at the same hour.

'The third upon the next night when the last stroke of twelve has stopped vibrating.'

One of the most popular Christmas stories of all time, Dickens's novel remains a great favorite all over the world. A poignant and thought-provoking story, it's a delight to read again and again.
Born in Portsmouth, England on 7th February 1812, Charles John Huffam Dickens was one of eight children. His father, John, worked as a government clerk, but was imprisoned during Charles's childhood due to outstanding debts. This forced Charles to support his family by going to work in a boot-blacking factory at the age of twelve.
Although Dickens went on to receive a middle-class education at Wellington House Academy, he continued to work at the factory. These experiences of the different elements of society influenced many of the novels he would write later in life.

Dickens first published his novels as weekly or monthly serials, a common practice at the time. It helped fuel his popularity with fans who eagerly anticipated each new installment of his stories. The plight of the poor became one of the major themes in Charles Dickens's novels - a reflection of the bitterness he felt about the way working-class people lived and were treated. Charles Dickens died on 9th June 1870.
"An extremely well done graphic adaptation of Dickens' classic. The book is true to the original, keeping all salient plot points as well as lesser but defining moments It also pays close attention to developing Scrooge's character over the course of the evening. In fact, I found all the characters to be well written. . . . The illustrations are artistic in style and match the tone of the book."
—Back to Books

"I highly recommend Campfire’s comics. They do what they are intended to do and do it in  a way that excites kids about classic literature."

— Chris Wilson, The Graphic Classroom (a resource for teachers and librarians)