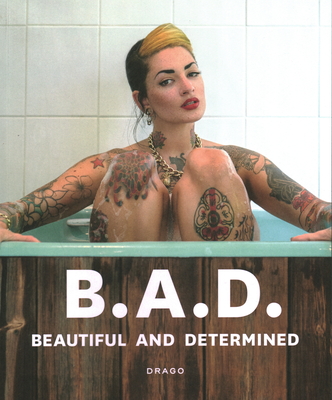 
Email or call for price.
Photographers Erika Z. Figabomba and Alessandra Tisato drove from Nevada through San Diego and up to the San Francisco Bay Area taking over 10,000 photos of beautiful, powerful women and non-binary people. These photographs celebrate beauty in a way that is far from the polished, glossy images of fashion and advertising; they also explore the meaning of nakedness in a society that seems to prioritize superficial entertainment over women/non-binary sexuality and overall body positivity. With 224 pages and more than 100 color photographs, this collection is a celebration of Beauty, Determination and Empowerment free from all genders and stereotypes. B.A.D. Beautiful And Determined is a revolution brought out to you through hundreds of photographs taken all around the world in more than 6 years. With critical texts by Carlotta Cossutta, a precarious researcher in political philosophy, who works on feminism and queer theories in and out of academia, and Elle Stanger, a queer person who writes sex education, short stories and advice columns and works to reduce shame and harm related to sexuality and touch, B.A.D. is more than a visual masterpiece. These women embrace nudity on their own terms; they love and cherish their bodies. Many of them are politically active, and all have strong opinions and give back to their communities on a daily basis. Rather than trying to find a single, one-dimensional answer to the definition of female and non-binary empowerment, B.A.D. (Beautiful And Determined) showcases a wide variety of positive and inspirational examples. Having previously worked in street and commercial photography, we felt the need to celebrate the life of those who hold an important place in our hearts and minds; women whose lifestyle is fierce and passionate, who have something to say and who are a step ahead of the typical idea of a model. This project was later brought to Europe where it continued to develop. The collected material is both powerful and diverse; it only seemed natural to bring it all together in a book: B.A.D. was born. B.A.D. will also include written content, produced by the models themselves, revolving around the subjects of sex, love, fetish, and relationships, as well as reflections on topics such as the display of female nudity and the role of women in society.--Drago.