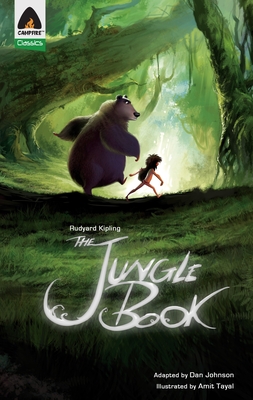 The 2016 Disney film adaptation of The Jungle Book is the latest artistic effort to capture the drama and excitement of the enduring tales Rudyard Kipling created more than 120 years ago. This Campfire Classics adapatation faithfully renders Kipling's original language and plot details in a stunning graphic novel format.

The adventure begins the night a boy, Mowgli, escapes certain doom after being trapped in the perilous clutches of the tiger Shere Khan. To protect Mowgli and to defy the tiger, the Seeonee wolf pack adopts the boy, giving him the nickname "Man-Cub". Other animals--a panther, bear, and python--teach the boy how to survive as Shere Khan continually pursues him through the jungle. Eventually, Mowgli and Shere Khan square off in an epic battle, from which only one will survive.

Rudyard Kipling was born on 30th December 1865 in Bombay, India, to Alice and John Lockwood Kipling. When Kipling was six, he and his three-year-old sister went without their parents to live in Portsmouth, England, for six years, after which they moved back to India. Throughout his life Kipling travelled to many countries, including South Africa, Australia, New Zealand, America, and Japan. Kipling started his career in 1882 as assistant editor of the Civil & Military Gazette in Lahore, Pakistan. Besides writing articles, he was wrote many short stories for the newspaper. He married Carrie Balestier in London on in January of 1982. Their first child, Josephine, was born later that year.
Kipling is regarded as one of the greatest British writers of the late 19th and early 20th centuries. Among his works are such classic novels as Captains Courageous and Kim; the short stories that make up The Jungle Book and The Second Jungle Book (including the Mowgli stories), Rikki-Tikki-Tavi, and The White Seal; and poems such as Mandalay and Gunga Din. He was the first English language recipient of the Nobel Prize for Literature in 1907. Rudyard Kipling died on 18th January 1936 of a perforated duodenal ulcer. His ashes are buried in Poets' Corner in Westminster Abbey.

"This is a very good adaptation of Kipling's classic work. Tayal  . . . is an excellent choice for this book, where his cartoony stylings handle the animals and the animalistic side of Mowgli very well. . . . [Johnson's] abridgement is smoothly successful.  -- ICv2 (Four Stars)