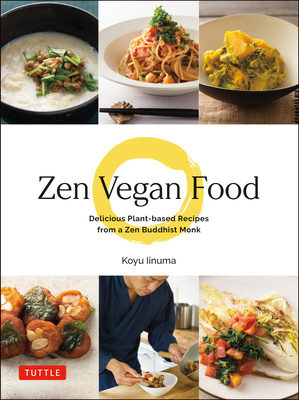 
Click Title to See Location Inventory
In this book, Buddhist temple priest and chef Koyu Iinuma shares the simple and delicious plant-based meals he prepares in the kitchens of Fukushoji temple in Yokohama, Japan. The 73 recipes showcased in Zen Vegan Food are incredibly beautiful and tasty, while also being nutritious, sustainable and ethically responsible. Color photos show the finished dishes, while comprehensive information on Japanese ingredients like seaweed, miso and tofu helps home cooks with shopping and preparation. In this cookbook, readers will find:
Though we may not typically associate Buddhist monasteries with trendy chefs and temple cafes, a young generation of priests, like Iinuma, are ushering in a new era--one which emphasizes openness and a reconnection to the natural world. Buddhist monastery chefs have been creating delicious vegan dishes for centuries, and Zen Vegan Food offers a modern take full of fun and flavor. For anyone interested in sustainable, plant-based eating, this book will be a revelation--with new ways to prepare delicious meals the whole family will enjoy.
Koyu Iinuma is the deputy chief priest of Fukushoji, a Tendai Buddhist temple in Yokohama, Japan. He was ordained as a monk at the famous Enryakuji monastery in Kyoto when only 19 years old. While studying at Taisho University in Tokyo, he decided to spread the word of Buddhism through food. After graduating, he trained at several restaurants in Tokyo and obtained a professional chef's license. He currently conducts shojin ryori (vegetarian Buddhist) cooking workshops at various temples in the Kanagawa area to people of all ages, pursuing his mission to teach an understanding of Buddhism through mindful and ethically responsible eating.