Fruit: The Art of Pastry (Hardcover) 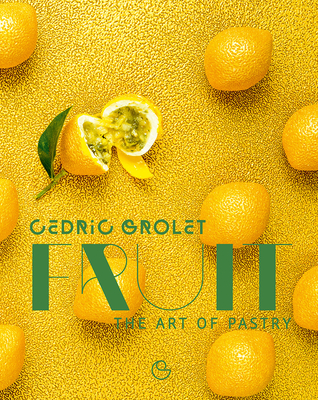 Fruit: The Art of Pastry (Hardcover)


Not in stock. At Our Partner Warehouse: Usually Ships in 4-7 Days.
Cédric Grolet is simply the most talented pastry chef of his generation—he was named World’s Best Pastry Chef in 2018. Food & Wine called his work “the apotheosis of confectionary creation.” He fashions trompe l’oeil pieces that appear to be the most perfect, sparkling fruit but are, once cut, revealed to be exquisite pastries with surprising fillings. They are absolutely unforgettable, both to look at and, of course, to eat.

This lush cookbook presents Grolet’s fruit-based haute-couture pastries like works of art. The chef explains his techniques and his search for authentic tastes and offers a peek into his boundless imagination—he begins the creation of each dessert by drawing. With 130 recipes featuring 45 fruits—citrus, berries, wild and exotic fruits, and even nuts—every pastry lover will want Fruit, for inspiration and to admire the edible sculptures made by this award-winning
star of French pastry making.

Cédric Grolet was named the World’s Best Pastry Chef. He is executive pastry chef at Restaurant Le Meurice Alain Ducasse in Paris and at his shop, La Pâtisserie du Meurice.