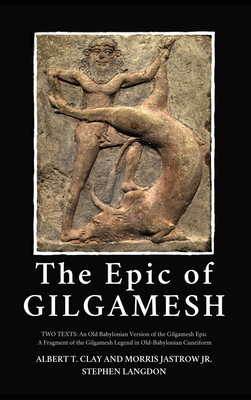 
Not in stock. At Our Partner Warehouse: Usually Ships in 4-7 Days.
"The Gilgamesh Epic is the most notable literary product of Babylonia as yet discovered in the mounds of Mesopotamia."The Gilgamesh Epic recount the exploits and adventures of a favorite hero and become the medium of illustrating aspects of life and the destiny of mankind. This Sumerian poems may be regarded as a confirmation of the statement that there are various traditions of the deluge apart from the Biblical one, which is perhaps legendary like the rest. This text (dating (circa 2100 BC) is often regarded as the first great work of literature.While credit should be given to Dr. Langdon for having made this important tablet accessible, Dr Albert T. Cay has shown that attention be called to his failure to grasp the many important data furnished by the tablet, which escaped him because of his erroneous readings and faulty translations. This new edition contains their complete texts (footnotes and commentaries included): (1) An Old Babylonian Version of the Gilgamesh Epic-On the Basis of Recently Discovered Texts by Albert T. Clay and Morris Jastrow Jr. (2) The Epic of Gilgamesh-A Fragment of the Gilgamesh Legend in Old-Babylonian Cuneiform by Stephen Langdon.
"Now with the tendency to attach to popular tales and nature myths lessons illustrative of current beliefs and aspirations, Gilgamesh's search for renewal of life is viewed as man's longing for eternal life. The sun-god's waning power after midsummer is past suggests man's growing weakness after the meridian of life has been left behind. Winter is death, and man longs to escape it. Gilgamesh's wanderings are used as illustration of this longing, and accordingly the search for life becomes also the quest for immortality. Can the precious boon of eternal life be achieved? Popular fancy created the figure of a favorite of the gods who had escaped a destructive deluge in which all mankind had perished. Gilgamesh hears of this favorite and determines to seek him out and learn from him the secret of eternal life. The deluge story, again a pure nature myth, symbolical of the rainy season which destroys all life in nature, is thus attached to the Epic. Gilgamesh after many adventures finds himself in the presence of the survivor of the Deluge who, although human, enjoys immortal life among the gods. He asks the survivor how he came to escape the common fate of mankind, and in reply Utnapishtim tells the story of the catastrophe that brought about universal destruction. The moral of the tale is obvious. Only those singled out by the special favor of the gods can hope to be removed to the distant "source of the streams" and live forever. The rest of mankind must face death as the end of life."