First Generation: Recipes from My Taiwanese-American Home [A Cookbook] (Hardcover) 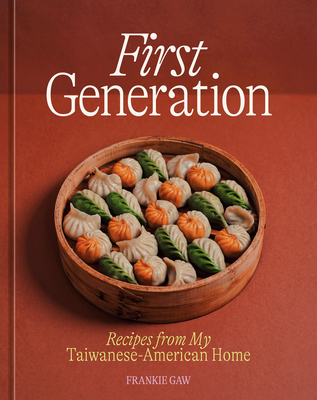 First Generation: Recipes from My Taiwanese-American Home [A Cookbook] (Hardcover)


On Our Shelves Now
In this stunning exploration of identity through food, the blogger behind Little Fat Boy presents 80 recipes that are rooted in his childhood as a first-generation Taiwanese American growing up in the Midwest.

“This book will transport you, it will make you cry (again and again), and it will delight you with flavor combinations that are both new and nostalgic.”—Molly Yeh, cookbook author and Food Network host

ONE OF THE BEST COOKBOOKS OF THE YEAR: Bon Appétit

In First Generation, Frankie Gaw of Little Fat Boy presents a tribute to Taiwanese home cooking. With dishes passed down from generations of family, Frankie introduces a deeply personal and essential collection of recipes inspired by his multicultural experience, melding the flavors of suburban America with the ingredients and techniques his parents grew up with.

In his debut cookbook, Frankie will teach you to master bao, dumplings, scallion pancakes, and so much more through stunning visuals and intimate storytelling about discovering identity and belonging through cooking. Recipes such as Lap Cheong Corn Dogs, Honey-Mustard Glazed Taiwanese Popcorn Chicken, Stir-Fried Rice Cakes with Bolognese, Cincinnati Chili with Hand Pulled Noodles, Bao Egg and Soy Glazed Bacon Sandwich, and Lionshead Big Mac exemplify the stunning creations born out of growing up with feet in two worlds.

Through step-by-step photography and detailed hand-drawn illustrations, Frankie offers readers not just the essentials but endless creative new flavor combinations for the fundamentals of Taiwanese home cooking.
Frankie Gaw is a former designer turned food writer and photographer who creates recipes based on his Taiwanese American upbringing. He’s the founder of the food blog Little Fat Boy, which has been nominated for a Webby and won Saveur’s Blog of the Year and the IACP Individual Food Blog Award. Frankie resides in Seattle, Washington.
“Dedicated to his parents, the Asian community, and the LGBTQ community, Little Fat Boy blogger Frankie Gaw’s debut cookbook is a buoyant, deeply felt exercise in memory, identity, and flavor. The food in Gaw’s cookbook attests to a palate shaped by the foods of the Midwest and the dishes cooked by his Taiwanese grandmothers.”—Eater

“‘Immigrants—their food and their stories—are the heart of America and what makes this country thrive. This is just one of those stories,’ writes Little Fat Boy blogger Frankie Gaw in this debut book.”—Epicurious

“Through step-by-step photography and hand-drawn illustrations, [Frankie] Gaw will teach you how to master Taiwanese classics like bao, dumplings, and scallion pancakes. But you’ll also find dishes that reflect his multicultural experience, like Lap Cheong Corn Dogs and Honey-Mustard Glazed Taiwanese Popcorn Chicken.”—Thrillist

“There’s an exciting energy in these books that really fights the shackles of the supposed ‘authenticity’ people expect their food to have. Frankie Gaw’s debut cookbook, First Generation, is no different. The food is flavor-packed . . . and the book is a necessary antidote for anyone who finds themselves in a cooking rut.”—Khushbu Shah, Food & Wine

“Frankie Gaw has long been documenting recipes from his upbringing as a Midwestern Taiwanese American on his blog, Little Fat Boy. His debut cookbook features some of his favorites . . . while reflecting on the resilience of the immigrant spirit.”—The Takeout

“[First Generation is] full of traditional Taiwanese favorites, as well as [Frankie Gaw’s] own unique creations that celebrate the various places and cultures that have shaped his cooking.”—Book Riot

“First Generation is a powerful exploration of personal identity alongside timely questions about what it means to be both Taiwanese and American. In this sparkling debut, Gaw delivers a blueprint of what all cookbooks should strive to be—personal, sincere, thought-provoking, and utterly hunger-inducing.”—Hetty Lui McKinnon, food writer and author of four cookbooks including To Asia, With Love

“First Generation is a beautiful memoir of food, evoking the emotions of being in between immigrant traditions and American life. Being in the middle is something that is difficult but is also a journey to be proud of, especially when the results are so delicious.”—Brandon Jew, author of Mister Jiu’s in Chinatown