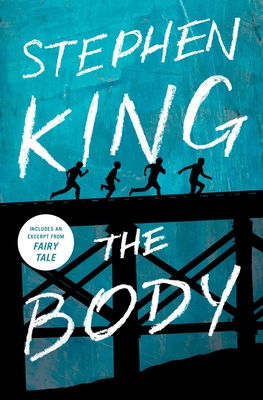 Timeless! A quick read that demands not to be forgotten. A classic coming-of-age novella that leaves you nostalgic at the very least. If you've seen Stand By Me but haven't read its predecessor, stop being a disgrace and read this book.

— From The Body by Stephen King
Set in the fictional town of Castle Rock, Maine

It’s 1960 in the fictional town of Castle Rock, Maine. Ray Brower, a boy from a nearby town, has disappeared, and twelve-year-old Gordie Lachance and his three friends set out on a quest to find his body along the railroad tracks. During the course of their journey, Gordie, Chris Chambers, Teddy Duchamp, and Vern Tessio come to terms with death and the harsh truths of growing up in a small factory town that doesn’t offer much in the way of a future.

A timeless exploration of the loneliness and isolation of young adulthood, Stephen King’s The Body is an iconic, unforgettable, coming-of-age story.
Stephen King is the author of more than sixty books, all of them worldwide bestsellers. His recent work includes Billy Summers, If It Bleeds, The Institute, Elevation, The Outsider, Sleeping Beauties (cowritten with his son Owen King), and the Bill Hodges trilogy: End of Watch, Finders Keepers, and Mr. Mercedes (an Edgar Award winner for Best Novel and a television series streaming on Peacock). His novel 11/22/63 was named a top ten book of 2011 by The New York Times Book Review and won the Los Angeles Times Book Prize for Mystery/Thriller. His epic works The Dark Tower, It, Pet Sematary, and Doctor Sleep are the basis for major motion pictures, with It now the highest-grossing horror film of all time. He is the recipient of the 2020 Audio Publishers Association Lifetime Achievement Award, the 2018 PEN America Literary Service Award, the 2014 National Medal of Arts, and the 2003 National Book Foundation Medal for Distinguished Contribution to American Letters. He lives in Bangor, Maine, with his wife, novelist Tabitha King.