The Imaginary Girlfriend: A Memoir (Paperback) 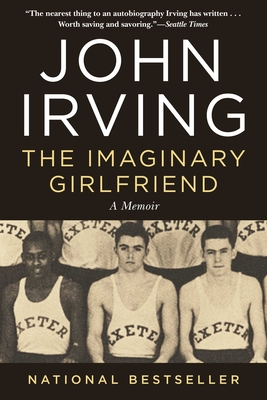 The Imaginary Girlfriend: A Memoir (Paperback)


Not in stock. At Our Partner Warehouse: Usually Ships in 4-7 Days
“The nearest thing to an autobiography Irving has written . . . worth saving and savoring."—Seattle Times

Dedicated to the memory of two wrestling coaches and two writer friends, The Imaginary Girlfriend is John Irving's candid memoir of his twin careers in writing and wrestling. The award‑winning author of bestselling novels from The World According to Garp to In One Person and Avenue of Mysteries, Irving began writing when he was fourteen, the same age at which he began to wrestle at Exeter. He competed as a wrestler for twenty years, was certified as a referee at twenty‑four, and coached the sport until he was forty‑seven. Irving coached his sons Colin and Brendan to New England championship titles, a championship that he himself was denied.

In an autobiography filled with the humor and compassion one finds in his fiction, Irving explores the interrelationship between the two disciplines of writing and wrestling, from the days when he was a beginner at both until his fourth wresting-related surgery at the age of fifty‑three. Writing as a father and mentor, he offers a lucid portrait of those—writers and wrestlers from Kurt Vonnegut to Ted Seabrooke—who played a mentor role in his development as a novelist, wrestler, and wrestling coach.
John Irving was born in Exeter, New Hampshire, in 1942. His first novel, Setting Free the Bears, was published in 1968, when he was twenty-six. He competed as a wrestler for twenty years, and coached wrestling until he was forty-seven. Mr. Irving has been nominated for a National Book Award three times—winning once, in 1980, for his novel The World According to Garp. He received an O. Henry Award in 1981 for his short story “Interior Space.” In 2000, Mr. Irving won the Oscar for Best Adapted Screenplay for The Cider House Rules. In 2013, he won a Lambda Literary Award for his novel In One Person. An international writer—his novels have been translated into more than thirty-five languages—John Irving lives in Toronto. His all-time best-selling novel, in every language, is A Prayer for Owen Meany.
"The Imaginary Girlfriend . . . should be required reading for anyone who wants to write."—Susan Cheever, from her foreword to Trying to Save Piggy Sneed

“The nearest thing to an autobiography Irving has written . . . Worth saving and savoring."—Seattle Times

“The Imaginary Girlfriend is a miniature autobiography detailing Irving’s parallel careers of writing and wrestling. . . . Tales of encounters with writers (John Cheever, Nelson Algren, Kurt Vonnegut) are intertwined with those about his wrestling teammates and coaches. With humor and compassion, [Irving] details the few truly important lessons he learned about writing. . . . And in beefing up his narrative with anecdotes that are every bit as hilarious as the antics in his novels, Irving combines the lessons of both obsessions (wrestling and writing) . . . into a somber reflection on the importance of living well.”—Denver Post

“Irving's wrestling coaches, his writing mentors, and his family are vivid, inviting readers into a colorful world."—USA Today

“A masterpiece . . . The generosity of spirit that marks his fiction leaks into his memoir in tender and surprising ways."—Edmonton Journal

"What's best about this memoir is that Irving, fine storyteller that he is, somehow sidesteps the limelight. What this piece is really about is mentorship and friendship and the feelings Irving carries for those who have helped him make his way. It is but another display of the wide and generous spirit that powers the best of Irving's fiction."—BookPage