As Crooked As They Come: Chicanery, comedy and disorganized crime in yesterday's Boston underworld (Paperback) 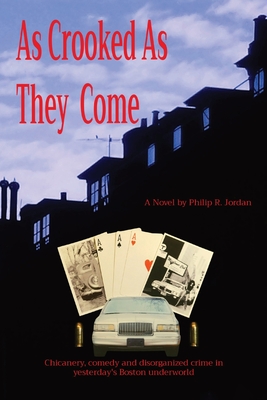 As Crooked As They Come: Chicanery, comedy and disorganized crime in yesterday's Boston underworld (Paperback)

"In his novel As Crooked as They Come, Sunderland author Philip R. Jordan spins a crime yarn that crackles with tension and humor." - Dan Bolles, Seven Days

It's not easy for single mom Patty Callahan, haunted by the knowledge that her estranged, elderly father is a third-generation criminal. His ties to Boston's underworld lead him to suspect an old enemy in the cold-case murder of his sister. To Patty's horror, she discovers that her mother has unwittingly agreed to play a part in her father's plot for vengeance. The story swiftly unfolds--peppered with snarky humor and zany episodes that counterbalance the darkest moments--as Patty finds help in a retired police detective who's a crime novelist. She's soon on the way to discovering who her aunt's killer truly is. But an alcoholic hit man, a murderous ex-con, a North End don and his not-so-wiseguy sons all stand in the way. Will Patty be able to intervene before her father acts, a vicious new gang muscles in, and blood from all sides is spilled?"The writing is brisk and the characters memorable. The story line moves nicely back and forth between the decades, showing how criminals and Boston itself has changed, as an aging mobster sets out to revenge the long-ago murder of a beloved sister. In As Crooked as They Come, Jordan supplements the work of people like Henry James, Eric Segal, Edwin O'Connor and George V. Higgins, who in their very different ways set out to bring Boston and its people onto our bookshelves." -Anthony Marro, retired editor of Newsday