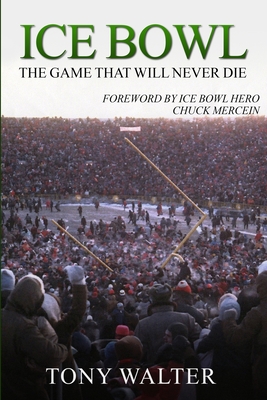 The 1967 NFL Championship Game - better known as the Ice Bowl - is the rare event in which stories from the day have earned a permanent place in family history and the lore of the sport. The Green Bay Packers defeated the Dallas Cowboys on a Wisconsin winter afternoon so cold that it renders the Packers' victory two weeks later in Super Bowl II almost a footnote in football history. Such is the impact of the Ice Bowl that references to the game populate everything from obituaries to league historical records.

Author Tony Walter was among the shivering multitude in Lambeau Field that New Year's Eve day. His role as a photographer's assistant rendered meaningless by the penetrating cold, he was able to watch the game from the sidelines and saw the dramatic final series unfold in front of him.

In Ice Bowl: The Game That Will Never Die, Tony shares stories and never-before-published photos from some of the other 50,000 people who legitimately can say, "I was at the Ice Bowl," along with others who experienced the game around the world. Passed down through the generations like some sort of badge of honor, the spirit of the Ice Bowl will live forever.