The Secret of the Stone Frog: A Toon Graphic (Toon Books) (Hardcover) 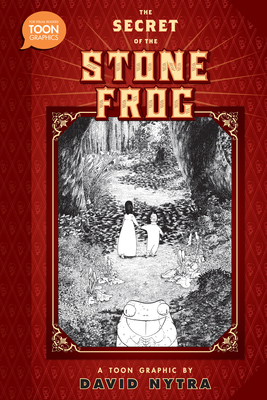 The Secret of the Stone Frog: A Toon Graphic (Toon Books) (Hardcover)


Email or call for price.
When Leah and Alan awaken in an enchanted forest, they have only each other and their wits to guide them. In a world full of pet bees and giant rabbits, they befriend foppish lions and stone frogs. Learning to overcome danger, they find their way home--and their independence.
David Nytra has been drawing since he was old enough to hold a pencil. The Secret of the Stone Frog is his first children's book. Though his own dreams are often unexciting and he's only a little bit allergic to bees, he loved books with many creatures in them as a child and he hopes he has put enough beasties in here to satisfy even the most demanding reader.

The intricate flowerings and soulfully etched forest backgrounds of the art make the black-and-white pages sing as though they were drawn in a rainbow of colors...To stick the landing, Nytra’s serene ending manages to be worthy of its glorious beginning. His cavalcade of dreamscapes is a rich and beguiling experience that deserves multiple immersions.
—Publishers Weekly (starred review)

Winsor McKay was a comics pioneer whose early experimentation with the form nearly predated the form itself. McKay’s spirit, along with his dream-inspired imagery, lives on through Nytra, whose remarkable debut taps into the same unearthly environment with a similarly enchanting effect. . . .The extraordinarily delicate and fine-lined art incorporates touches of manga aesthetic so that, like the story itself, it merges timeless narrative elements to craft something wonderfully innovative. TOON took a chance on a brand-new talent to create the first of their ever-so-slightly more mature graphic novel line and it’s paid off with a smashing success.
—Booklist (starred review)