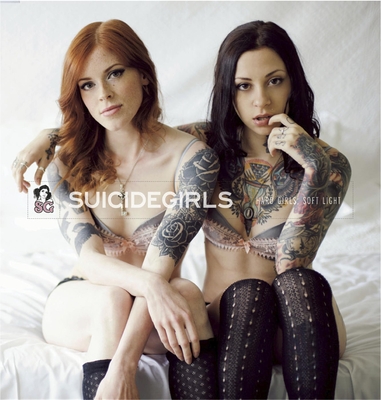 
Not in Stock. Backordered at the Warehouse.
The SuicideGirls are a collection of more than 2,500 pin-up girls devoted to changing your idea about what makes a woman beautiful ... and they are naked. Started in Portland, Oregon, by Missy Suicide and her friends in 2001, the SuicideGirls broke conventional notions of beauty and the pin-up girl ideal as defined by men's and women's magazines and the culture at large. In addition to the millions of visitors that frequent the SG Website, this book will appeal to both men and women (their membership is split nearly equally) who thought the shy, artsy chick with the black eyeliner and nose ring was the sexiest girl in high school (every guy in Silverlake, Williamsburg, and beyond).

Combining her love of pin-up photography, music and art with personal ideals of female empowerment nurtured in DIY culture, Missy founded SuicideGirls as a place where a woman can be herself and where her confidence, creativity and uniqueness are what defines her. While it is true that beauty is in the eye of the beholder, Missy found the camera lens of mainstream media a bit myopic for her taste. SuicideGirls began and has grown from a desire to expand mainstream culture's definition of what is beautiful, and to show that it can be realized in a more diverse range of women than those who grace the pages of most fashion magazines and movie posters. What started for Missy as personal expression has now become a revolution.Raised in Portland, Oregon in what could be described as an eclectic and artistic environment, Missy combines her traditional fine arts training with new media business acumen in the operation of SuicideGirls. In addition, Missy continues to photograph women for the site. Her photography focuses on depicting how each model feels sexiest about themselves in the photos and has inspired a generation of young women to embrace their bodies and showcase their confidence.Since launching SuicideGirls, Missy has become a voice for the culture outside of what mainstream media is reporting. She has been interviewed on issues relating to music, the Internet, pop culture and body image on numerous radio stations and in publications such as the New York Times, Wired, Spin and Elle. Recently featured as one of the top "12 Sexiest Jobs in Hollywood" and the "20 Sexiest Jobs on the Web", Missy has appeared on HBO, Fox News, the hit series "CSI: NY" on CBS, as well as the four SuicideGirls movies in constant rotation on Showtime.