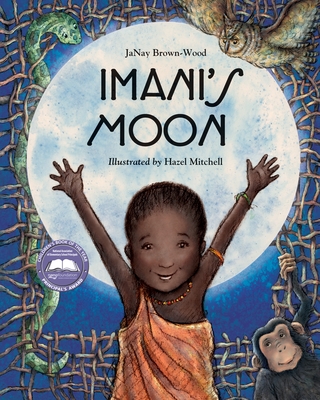 
Email or call for price.
A delightful mix of folklore and fantasy follows Little Imani as she works up the courage and confidence in herself to achieve big things.

Little Imani is the smallest one in her village. The other children make fun of her and tell her she's too tiny, that she's an ant, that a meerkat might stomp her, and that she'll never amount to anything. Imani begins to believe them.

An unforgetable story about the power of believing in ourselves that is sure to inspire young readers to reach for their own moons.
JaNay Brown-Wood has always had a passion for writing. She loves coming up with new characters and watching them grow. With the publication of Imani's Moon, she has attained her ambition to become a published children's author. She lives in California.
Imani is the smallest girl in the village and therefore the target of much teasing. At night her mother fortifies her with tales of mythology and folklore, which the author mentions are part of the Maasai oral tradition. Imani is particularly inspired by the tale of Opala, the fearless moon goddess, and she sets out to accomplish her own great feat. After several failed attempts leave her disheartened, Imani notices warriors performing the adumu, a Maasai jumping dance. Inspired once again, Imani jumps up and down, higher and higher, until she reaches the moon. The message of hope and gentle lyrical tone make this the perfect story with which to lull listeners into sweet slumber. Mitchell's watercolor-and-graphite illustrations are filled with movement, emotion, color, and perspective. An author's note, meanwhile, contextualizes the story within Kenyan and Tanzanian culture and extends it beyond the oral tradition and into the written one.
-Booklist

The cover illustration of a small girl, arms outstretched in front of a perfect full moon, invites readers into this story of determination tinged with magical realism. The scene is set on the title page: straw-covered huts, penned cattle, and flat-topped trees on a hilltop in Africa. Watercolor paintings add vibrant color and clear cultural details, for example, the beaded jewelry and characteristic clothing of the Masai. Imani is the smallest child in her village and a target for teasing. Her mother's nighttime stories of the moon goddess Olapa inspire her to try to touch the moon. Undeterred by children's taunts, Imani fails until she observes "young warriors performing the aduma, the jumping dance. Over and over they jumped high into the sky, their heads caressing the clouds." And so, like a warrior, Imani jumps, higher and higher, until she lands on the moon. That night she is the one who tells a story, "The Tale of the Girl Who Touched the Moon."
-School Library Journal

Imani endures the insults heaped upon her by the other village children, but she never gives up her dreams. The Masai girl is tiny compared to the other children, but she is full of imagination and perseverance. Luckily, she has a mother who believes in her and tells her stories that will fuel that imagination. Mama tells her about the moon goddess, Olapa, who wins over the sun god. She tells Imani about Anansi, the trickster spider who vanquishes a larger snake. (Troublingly, the fact that Anansi is a West African figure, not of the Masai, goes unaddressed in both text and author's note.) Inspired, the tiny girl tries to find new ways to achieve her dream: to touch the moon. One day, after crashing to the ground yet again when her leafy wings fail, she is ready to forget her hopes. That night, she witnesses the adumu, the special warriors' jumping dance. Imani wakes the next morning, determined to jump to the moon. After jumping all day, she reaches the moon, meets Olapa and receives a special present from the goddess, a small moon rock. Now she becomes the storyteller when she relates her adventure to Mama. The watercolor-and-graphite illustrations have been enhanced digitally, and the night scenes of storytelling and fantasy with their glowing stars and moons have a more powerful impact than the daytime scenes, with their blander colors. While the blend of folklore, fantasy and realism is certainly far-fetched, Imani, with her winning personality, is a child to be admired.
-Kirkus Reviews