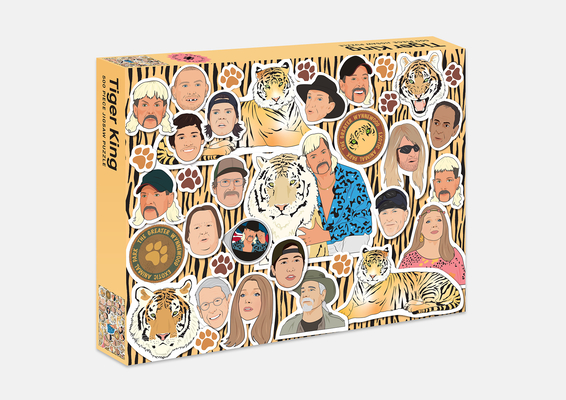 
Backordered. On Order at the Warehouse.
Relive Tiger King - the most puzzling show to ever grace (or curse) our screens - with this hilarious unofficial illustrated jigsaw!

In 2020, the world became transfixed by the twisting tale of Joe Exotic, Carole Baskin and their gangs of cat-loving cronies. Now the characters of Tiger King are back - in this unofficial 500 piece jigsaw puzzle.

Illustrated by Chantel de Sousa, this fun collage features the faces of Joe and his three husbands, as well as his zookeeping compatriots like Saff and John. Naturally Carole and her husband Howard are here too, as well as other big cat enthusiasts Jeff Lowe and Doc Antle.

Assembling this jigsaw is one to pass time until the next bizarre chapter in the Tiger King saga reveals itself. And surely, that's just a matter of time.
Chantel de Sousa created the fun illustrations for this jigsaw. She's previously illustrated the Will & Grace Playing Cards, Seinfeld Playing Cards, Friends Playing Cards, and Golden Girls Tarot Cards, all released by Smith Street Gift.