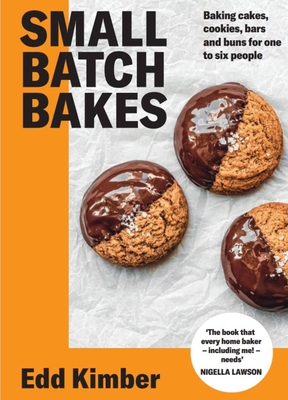 
On Our Shelves Now
Accessible, easy baking for singles, small households, students or anyone who likes to bake a lot

Baking recipes typically serve large groups of people, perfect for a party, a celebration, a crowd. But what about when you just want one cookie and you don’t want to spend the money on making a big batch, or don’t have the people to share them with? Sometimes you just don’t want to be faced with leftovers you need to eat for the rest of the week.

Enter Small Batch Bakes, great for singles, small households, students or anyone who likes to bake a lot. The recipes serve one, two, four or six and are predominately sweet but also include savory varieties that would be perfect for a lunch or impromptu picnic. The skill level is naturally on the easier side, and equipment needed kept to a minimum, something that will be welcomed by many people baking just for themselves.

"The lone-dweller, in need of the balm that only a freshly baked biscuit can provide, is faced with a most unsatisfactory choice: do without or make a batch big enough to keep a huge hungry household happy." - Nigella Lawson, Cook, Eat, Repeat
Edd Kimber won the first series of The Great British Bake Off in 2010. He is the author of The Boy who Bakes (2011), Say it with Cake (2012), Patisserie Made Simple (2014) as well as the best-selling One Tin Bakes (2020) and One Tin Bakes Easy (2021). He has appeared on Sunday Brunch, Market Kitchen and Perfect, as well as the BBC Good Food Show and other shows around the country. He is a contributing editor to Bake from Scratch magazine, a go-to baking writer for Olive magazine, a baking teacher at Leith's School of Food and Wine, as well as a QVC presenter and a brand ambassador for KitchenAid and Nordicware. Edd has a popular blog www.theboywhobakes.com, where he shares his innovative baking recipes, which are always loved by his loyal following. @theboywhobakes