Artist as Astronaut: The Otherworldly Art of Ionel Talpazan (Paperback) 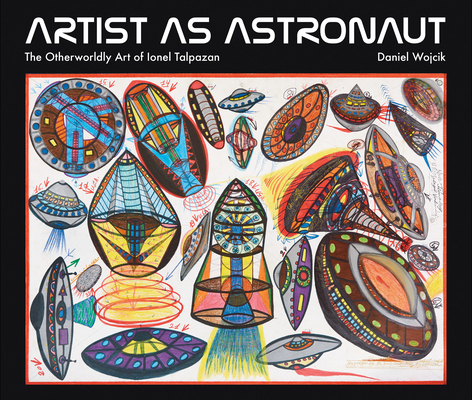 Artist as Astronaut: The Otherworldly Art of Ionel Talpazan (Paperback)


Not Yet Published - Available for Pre-Order Now
A vibrant collection of artworks by, and interviews with, the Romanian-American visionary artist Ionel Talpazan.

In the early 1960s, after a terrible beating by his foster mother outside their home in rural Romania, the young Ionel Talpazan had a life-transforming vision of "a beautiful blue light of energy" that he later believed to be of extraterrestrial origin. Four years after his experience, at age 12, he attempted to depict his numinous encounter, and began to obsessively draw otherworldly vehicles and celestial energies.

In 1987, he escaped from Ceausescu's regime in Romania, swimming the Danube River to Yugoslavia where he was imprisoned and then sent to a refugee camp. He was later granted political asylum in New York City, where he survived by selling his art on the streets and in the flea markets of Manhattan.

Over the years, Talpazan experimented with a wide range of materials and techniques, from sculptures and paintings to detailed, diagrammatic representations of flying discs and their propulsion systems, later claiming that his art incorporated the secrets of free energy and intergalactic travel. He produced more than 1000 works during his lifetime and said that his work possessed a scientific as well as artistic value. Despite ongoing adversity and a life of poverty, Talpazan's impulse to create was relentless, ending only with his death in 2015. His work now has achieved international acclaim and is included in important collections and museums throughout the world.

Folklorist and art writer Daniel Wojcik has spent many years interviewing Talpazan and documenting his remarkable artistic vision and this book is the culmination of his fascination with this truly otherworldly artist.
Daniel Wojcik has published widely on the topics of apocalyptic belief, visionary culture, art and trauma, subcultures, and vernacular expression. He is the author of Outsider Art: Visionary Worlds and Trauma, The End of the World As We Know It: Faith, Fatalism, and Apocalypse in America, and Punk and Neo-Tribal Body Art. He is also a regular contributor to magazines and journals on the topics of visionary art, music, culture, and alternative religions.