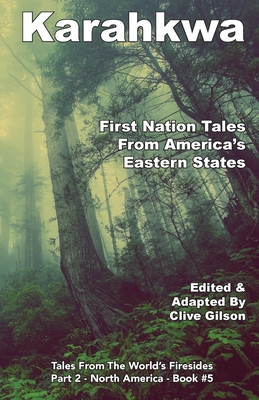 These stories cover a broad range of nations and tribes from North Americas eastern and south-eastern regions. Many of the stories have been told as part of the Iroquois and Cherokee traditions.

The Iroquois are a historically powerful northeast Native American confederacy in North America. They were known during the colonial years to the French as the Iroquois League, and later as the Iroquois Confederacy, and to the English as the Five Nations, comprising the Mohawk, Onondaga, Oneida, Cayuga, and Seneca. After 1722, they accepted the Tuscarora people from the Southeast into their confederacy and became known as the Six Nations.

Like many cultures, the Iroquois' spiritual beliefs changed over time and varied across tribes. Generally, the Iroquois believed in numerous deities, including the Great Spirit, the Thunderer, and the Three Sisters, the spirits of beans, maize, and squash. The Great Spirit was thought to have created plants, animals, and humans to control the forces of good in nature, and to guide ordinary people. Orenda was the Iroquoian name for the magical potency found in people and their environment. The Iroquois believed in the spiritual force that flowed through all things, and they believed if people were respectful of nature, then the orenda would bring about positive results. There were three types of spirits for the Iroquois: 1) Those living on the earth, 2) Those living above the earth and, 3) the highest level spirits controlling the universe with the most high being known variously as the Great Spirit, the Great Creator or the Master of Life.

Cherokee spiritual beliefs are held in common among the Cherokee people - Native American peoples who are indigenous to the south-eastern woodlands, and today live primarily in communities in North Carolina (the Eastern Band of Cherokee Indians), and Oklahoma (the Cherokee Nation and United Keetoowah Band of Cherokee Indians). Some of their beliefs, and the stories and songs in which they have been preserved, exist in slightly different forms in the different communities in which they have been preserved. But for the most part, they still form a unified system of theology.

For my part, the journey through these many and varied stories is a delight and a wonder. I can almost smell the woodsmoke...