Rosicrucian Magic: A Reader on Becoming Alike to the Angelic Mind (Hardcover) 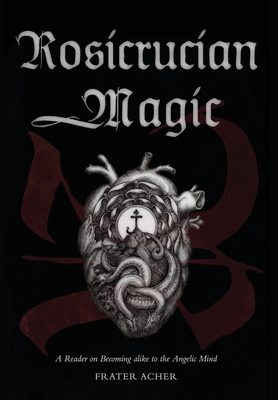 Rosicrucian Magic: A Reader on Becoming Alike to the Angelic Mind (Hardcover)

Rosicrucian Magic is a book of magical reformation that lays a path of contact with spirits and beings through a lens of integrity. Drawing upon wisdom and knowledge from the ancient world through to eighteenth century influences and beyond, Frater Acher takes us on a journey of discovery on Becoming Alike to the Angelic Mind as originally articulated by Johannes Trithemius.

Frater Acher draws deeply from decades of experience as a practitioner and researcher of Western Magic to teach the reader how to unlock mystical texts and magical ritual. Rosicrucian Magic illuminates a path through the Mysteries and highlights how spirit communion evolves to become an everyday practice rooted in experience, ethics, knowledge and wisdom.

At the heart of the book, and for the first time in English language, Frater Acher presents a full translation and in-depth analysis of a forgotten high-degree ritual from the famous Order of the Golden and Rosy Cross. The occult artist Jos Gabriel Alegr a Sabogal contributes beautiful new original illustrations, and has painstakingly restored the ritual's secret seal, a central symbol of mystical mediation.

Frater Acher is a lone practitioner of the magical and mystical path. He studied Western Ritual Magic in theory and practice at I.M.B.O.L.C. and has been actively involved in magic for more than twenty years.

In 2009 he started the now hugely popular theomagica.com a website dedicated to magical practice, knowledge and insights. In 2020 he founded Paralibrum together with Frater U∴D∴ and he continues to be an active collaborator of Quareia Magical Training.

He is best known for the Holy Daimon cycle, published in three volumes with Scarlet Imprint between 2018 to 2021. Earlier this year he released 'Clavis Go tica' (Hadean Press 2021) with artistic collaborator Jos Gabriel Algr a Sabogal, which can be considered a companion volume to the present book.

Frater Acher holds an MA in Communications Science, Intercultural Communications and Psychology as well as certifications in Systemic Coaching and Gestalt Therapy. Frater Acher is a German national, and after several years of living abroad, he is now resident in Munich, Germany.