The Academy of the Sword (Hardcover) 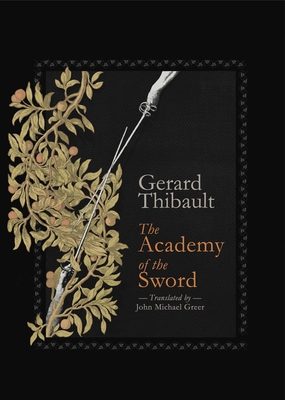 The Academy of the Sword (Hardcover)

Four centuries ago, the famed swordsman Gerard Thibault d'Anvers wrote one of the forgotten classics of the Western esoteric tradition--a comprehensive manual of swordsmanship as a Western martial art based on Renaissance sacred geometry.

Rescued from oblivion and translated into readable English by widely respected modern occultist John Michael Greer, The Academy of the Sword is an astonishingly detailed instructional guide on the way of the sword as it was practiced in the age of the of Musketeers. It covers every aspect of sword training from stance and footwork and the development of sensitivity and timing to hundreds of detailed techniques for overcoming opponents armed with all of the standard weapons of the time.

This new volume also lavishly reproduces the beautiful 17th-century etchings that accompany the instructions, and which provide a compelling glimpse into the ritualistic world of duelling.

The Academy of the Sword will be invaluable to readers interested in historical Western martial arts, students of stage fight, and practitioners of sacred geometry alike.

Gérard Thibault d'Anvers (ca. 1574-1627) was a Dutch fencing master and author of the 1628 rapier manual Academie de l'espée (The Academy of the Sword).
John Michael Greer has been a student of the occult traditions and nature spirituality for more than twentyfive years. He is the author of numerous articles and more than ten books including Natural Magic, The New Encyclopedia of the Occult, The Druidry Handbook, and The Druid Magic Handbook. He is also the coauthor of Learning Ritual Magic and Pagan Prayer Beads. He lives in Ashland, Oregon with his wife Sara.