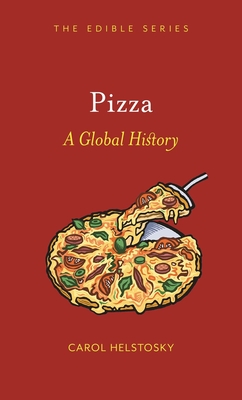 
Not in stock. At Our Partner Warehouse: Usually Ships in 4-7 Days.
You can pick Chicago deep dish, Sicilian, or New York-style; pan crust or thin crust; anchovies or pepperoni. There are countless ways to create the dish called pizza, as well as a never-ending debate on the best way of cooking it. Now Carol Helstosky documents the fascinating history and cultural life of this chameleon-like food in Pizza.
Originally a food for the poor in eighteenth-century Naples, the pizza is a source of national and regional pride as well as cultural identity in Italy, Helstosky reveals. In the twentieth century, the pizza followed Italian immigrants to America, where it became the nation’s most popular dish and fueled the rise of successful fast-food corporations such as Pizza Hut and Domino’s. Along the way, Helstosky explains, pizza has been adapted to local cuisines and has become a metaphor for cultural exchange. Pizza also features several recipes and a wealth of illustrations, including a photo of the world’s largest and most expensive pizza—sprinkled with edible 24-karat gold shavings and costing over $4000.   Whether you love sausage and onions on your pizza or unadorned cheese, Pizza has enough offerings to satiate even the pickiest of readers.
Carol Helstosky is associate professor of history at the University of Denver. She is also the author of Garlic and Oil: Politics of Food in Italy and Food Culture in the Mediterranean.
"The Edible series contains some of the most delicious nuggets of food and drink history ever. Every volume is such a fascinating and succinct read that I had to devour each in just a single sitting. . . . food writing at its best!"
— Ken Hom, chef and author

"Books in Reaktion's Edible series are paragons of their type; concise and flavorful, jammed with interesting facts, period photos and just a handful of recipes, in case you want to 'do it yourself.' I recommend these books to foodies and academics alike."
— Robert Sietsema, restaurant critic for the Village Voice

"It is indeed difficult to overestimate pizza's importance to America or America's importance to pizza, even if today's chain pizzas would make a Neapolitan fume. . . . However, while Pizza Hut and other chains have brought a standardized pie to the world, it was eventually by unstandardizing, Helstosky shows, that chain pizza has flourished globally, taking on the foodways of different countries."
— Nina C. Ayoub

"Pizza is structured a lucid thesis: the food originated as a poor person's meal but has been culturally reified. Helstosky makes an interesting point regarding the authenticity of a food, pointing out that those who bemoan the commercialization of the pizza ignore its humble origins. This is not say that she promotes or praises Domino's, but she points out the futility of trying to prevent a traditional food from changing. . . . Ultimately, Pizza offers a succinct overview of food history, with impressive analytical heft for a book of its size."
— Margot Kaminski

"Whether they're pizza fanatics or pizza deniers, readers are quite likely to find Helstosky's book fascinating. Her research is impressive, she writes clearly, the photographs are captivating, and the approach to delineating world history through a specific food actually works."
— Steve Weinberg