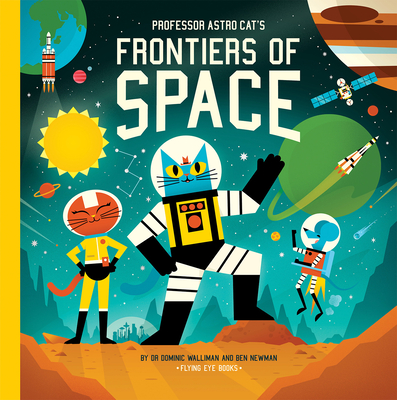 
Coming Soon - Available for Pre-Order Now
Blast off with this new edition of Professor Astro Cat's Frontiers of Space, the first book in the best selling Professor Astro Cat series!
Featuring eight new spreads and updated details about how rockets work, recent missions to Mars, space junk, black holes, and many more new insights into the ever-developing science of space and the outer reaches of the universe!

Professor Astro Cat is the smartest cat in the alley. He's got a degree in just about every discipline under the sun! Speaking of the sun, he happens to be specialist on that too, and Professor Astro Cat's Frontiers of Space will tell you everything that there could be to know about our star, our planet, our solar system, our galaxy, and our universe. The professor's made sure of that; he's a fastidious little feline! Professor Astro Cat's Frontiers of Space also explores topics such as gravity, extraterrestrial life, time, and many other fascinating subjects that will take you and your children on a journey to the very frontiers of space!
Dr Dominic Walliman produces the popular YouTube channel Domain of Science. He has a PhD in quantum device physics and worked for several years in the quantum computing industry. He lives in Vancouver, Canada.

Ben Newman is an award-winning illustrator who has racked up an impressive list of clients including Penguin, the BBC, and the New York Times, amongst many others.